Valley of a Thousand Hills hero and South African canoeing icon, Thulani Mbanjwa is readying himself for another strong showing at the 2017 FNB Dusi Canoe Marathon despite having some telling obstacles standing in his pathway to the 16-18 February event.

While still filled with belief that he can compete at the sharp end of the Dusi – a race that floods his heart with love and his head with good memories – the reality of life is a growing challenge an advancing Mbanjwa must overcome if he is to add a second Dusi scalp to his repertoire in 2017.

“I know I’m still good enough to compete and my experience is a big advantage for me now too,” a usually calm and reserved Mbanjwa says with unusual vigour and purpose. “I still love racing and I know I still have lots left in the tank as far as my paddling goes!”

“It’s just now difficult to find the time to train properly as I’m very busy with my job and I’ve also got a young family I have to think about and care for as well,” he adds.

Despite the top echelons of the sport having become increasingly competitive since his career defining victory and some in the country’s paddling circles of the belief that he is yet to truly fulfil his remarkable talent, the 33 year-old has unassumingly notched up a list of Dusi results that remains the envy of most.

As the build up to February’s challenge continues, the experienced warhorse remains committed to his Dusi cause wholeheartedly, eager to put in another strong showing and challenge for a podium – or better – once more.

Mbanjwa has however recently also had to take cognisance of new key life considerations – the rigours of the working world as well as his young family’s future.

Serving as KwaZulu-Natal Canoe Union’s Development Officer, Mbanjwa spends much of the week panning around, caring for and mentoring the next generation of paddling stars, a job he thoroughly enjoys but also appreciates the impact it has, especially recently, on his life as a professional athlete.

“Development in canoeing has received some great support from the KZN Department of Sport and Recreation in the past and even though this continues, we are now having to go out and look for more money from corporates in order for us to support our programmes,” explains Mbanjwa. 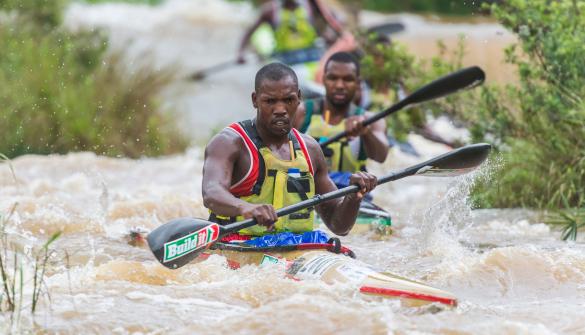 “We recently opened a Development Trust and so now as KNCU Development Officer, a lot of my time is going to be spent traveling and going to meetings, trying to secure funding from businesses for our development guys to be able to learn to paddle, travel to and take part in races, etc.

“So, without making any excuses, it’s tough to know whether I’ll now have enough time to train before this Dusi for me to be right up there again.

“I started my training early and I will still do my best, but I know I will also be very busy with work.”

Seeing his young protégés climb the ranks brings Mbanjwa great joy, but so does his racing; a tricky equation the paddling icon currently finds himself trying to balance.

“In my heart, all that I want to see is some of our youngsters on the podium at Dusi and other big races around South Africa!

“Not all of our young guys are good runners and so we’re trying to start an academy that will also include marathon and sprints and with next year’s Marathon World Champs being right in our own back yard in Pietermaritzburg, it is our goal to get a few of our guys into the South African squad in the junior age groups for that.

“As much as I love my job as Development Officer and it makes my heart so happy to see the youngsters doing well, I also still love my paddling and want to do well there too, so it’s difficult at the moment.

“I know that I just have to push that much harder to do well.”

Regardless of his final physical condition come February’s encounter, the 2017 FNB Dusi will be another special time for Mbanjwa who each year feels privileged to race in front of his own community.

“Racing on my home ground, with the support that I get right through the Valley, is what I love the most about the Dusi!” he beams.

“I’ve been at the front of the race before and yet still now I get all the support from the people of the Valley wherever I am in the race.

“Racing in front of the crowds of people, our family friends – it is just the most amazing feeling and I can’t to experience that again in February!”