A glimpse into the future of South Africa’s women’s river paddling talent may have to temporarily be put on ice as the Under-23 age group’s newcomers, Cana Peek and Kyeta Purchase, remain undecided on their participation in the 2017 FNB Dusi Canoe Marathon which takes place from 16-18 February.

Staged in just the second month of the year, the FNB Dusi is traditionally a golden opportunity for the paddling fraternity to get an early indicator of who the next emerging stars in age-group racing are likely to be.

However, as former U23 stalwart and double World Champs bronze medallist Jenna Ward moves up into the senior division, the emergence of her successors at the 2017 Dusi hangs in the balance as the likes of Peek and Purchase – both junior graduates come the start of the new year – remain uncertain.

“I really have no idea at this stage,” confirms Peek on her commitment to tackling the upcoming FNB Dusi.

“I’m really not sure just yet,” Purchase chimes similarly.

Having recently completed their high school careers, the exciting young pair – who raced together to third place overall and the U18 Girls’ Dusi title in February 2016 – are now faced with various other challenges that jostle with their Dusi plans.

“I’m going to be studying BA Sports Science down at Maties (Stellenbosch University) next year – which is really exciting – so I’m busy preparing for that while I’m also waiting to hear if I’ve gotten into res or not,” explains Peek.

“Having just written matric finals, all my focus has been on those this year and so I haven’t seen a boat in ages. Dusi 2016 was my last major race!”

For Purchase, the distraction from Dusi remains more of a paddling one. “Next year’s Marathon World Champs in Pietermaritzburg is a really big goal of mine, so I’m still trying to weigh up whether to also do Dusi or just to focus on getting ready for Worlds.”

For Peek, river racing is her primary paddling discipline and the Dusi remains the highlight of her paddling year annually.

With both her mom, Kim, and sister, Jordan, confirming themselves as 2017 Dusi definites, the door remains open as far as Cana’s participation goes.

“Dusi is something that, as a family, we’ve always done and it is my favourite race.

“My mom and sister are doing Dusi and I recently spent some time on the Umko, so maybe (I’ll do Dusi).

However, should the young Euro Steel star commit to the challenge, she would be well advised to put her astonishing 2015 runner-up effort – a feat achieved as a 16 year-old schoolgirl – out of her mind and tackle the challenge with a fresh perspective after some time away from the sport.

“In previous years I was fit by this stage of the build-up, whereas this year I’m nowhere near that,” explains Peek.

“My second place in the last K1 Dusi has also set myself quite a high standard, one that I would want to live up to again, but I’m not sure if I could this time given my lack of preparation.

“If I don’t do Dusi in 2017 then I will definitely be back again in 2018!” she adds, sounding an ominous warning to her fellow female competitors.

While far less experienced on the river and having only made her Dusi debut in February, Euro Steel/Mocké Paddling’s Purchase’s river paddling continues to improve steadily and a last minute Dusi challenge would be greatly aided by the recent running training she has immersed herself in. 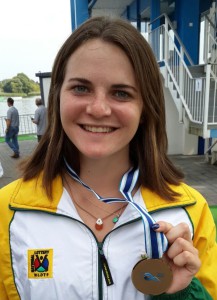 “Running with a boat is tough but I’ve been running this whole holiday,” says Purchase.

“I ran when I was younger; it’s not something I necessarily enjoy but I guess, to an extent, it does come quite naturally to me.”

The lure of the diminished U23 talent pool is another aspect Purchase struggles to ignore.

“Moving up into Under-23 is really exciting as a new age-group means new challenges!

“If I do do Dusi then I definitely want to finish on the Under-23 podium; winning the age-group would be really nice!”

While Purchase and her former team mate, the younger Peek sibling, remain on the fence, U23 regular Kerry Segal has confirmed her participation, albeit on a reduced level of competitiveness.

“I’ve been running a bit and would obviously like to do well but I’ll be taking it easy and just see how things go.”

The combination of Ward’s progression, Cana Peek and Purchase’s indecision and Segal’s relaxed approach all looks set to play perfectly into the hands of older Peek sibling, Jordan – a pedigree paddler in her own right – come the 2017 FNB Dusi and it’s U23 Women’s crown challenge.

“Who knows though, we’ll just have to see.”