As the rains start to make a decided difference to river levels across KwaZulu-Natal, paddlers from all over are honing their skills during a busy few month period with FNB Dusi Canoe Marathon podium contender Andrew Houston sharpening up his preparations as he builds towards the tough K1 Dusi outing from 16-18 February. 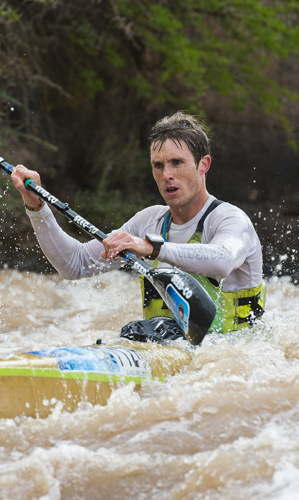 The Euro Steel star has been mixing it up with the big boys of the river marathon scene for a few seasons and realised that he was able to compete with the best if he prioritised his preparation and took a more clinical look at how he built up for races.

“When I was younger I didn’t really put a lot of effort into preparing for races and it would mean that I didn’t understand why I was so tired!” the laid back KZN Midlands local mentioned.

“Bianca (Haw) has had a coach that has been helping her with her training on her bike and I have been using those elements to help me in my preparation. There has been a really serious mindset shift from me and I am working really hard towards the Dusi.”

Houston, who finished fifth in the last K1 Dusi in 2015, has been hampered by illness recently and having been under the weather for the better part of three weeks his training regime would have taken quite a severe hit.

“I definitely had an eye on getting a podium this year at the Dusi but after getting sick towards the end of last year I think that a top five will be a more reasonable goal.

“My allergies cause a lot of problems for me this time of year but it didn’t help that I picked up a virus doing a mountain bike race in the Western Cape last year and that set me back a lot but I am back to full strength and training hard,” added a resurgent Houston.

With a naturally laid back demeanour, Houston is still in the process of wrapping his head around how he is going to go about taking on the best paddlers in the country at the Dusi in late February but isn’t losing too much sleep over it.

“I haven’t put too much thought into my tactics yet but one thing that I am going to do this year is not get too caught up in the action at the front of the race.

As the Dusi approaches paddlers are scrambling for seeding points which will give them an advantage come the 16th of February and despite having not paddled on the Msundusi River yet, Houston isn’t feeling the pressure too much.

“I try and stay off the Dusi River for as long as possible as I am quite prone to illness so I am putting a bit of pressure on myself when it comes to getting some seeding points.

“The Hi-Q Challenge is the day after Bianca’s 21st birthday so I think I am going to have to focus my efforts on the Campbell’s to Dusi Bridge as a race to gain seeding points!

“I am currently up in Underberg and focusing on the N3TC Drak Challenge so I will start directing my attention to the Dusi after that,” Houston commented.