The greatest name synonymous with the FNB Dusi Canoe Marathon is undoubtedly the “Dusi King” Graeme Pope-Ellis, the man who has won more Dusi’s than anyone and completed more Dusi’s than any other, however 2017 will see his friend and Dusi stalwart Lyle Wheeler potentially equal his incredible record with his 46th attempt when the race gets underway on 16 February. 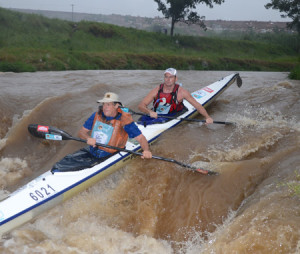 The 67 year old from Umlaas Road has gone about his previous Dusi’s with a quiet demeanor and with 45 in a row under the belt he is quick to point out that he is just occupying the spot of most Dusi’s with Pope-Ellis and all the praise should fall on the greatest Dusi paddler of all time.

“Graeme is the legend,” Wheeler mused. “I might be equaling his record this year but it will be incredibly difficult to overtake him – to me it’s just a number and he is the hero of the race and must be remembered that way.

“It will be nice to equal his record but I still just think of myself as one of the boys and Graeme as the legend of the race.

“I might be seen as a legend of the race but to all of us Graeme is the legend of the Dusi and nothing can take that away from him.”

When Wheeler took on his first Dusi adventure in 1970 he was the first person to admit that he never felt like he would get to the brink of joining the Dusi King on 46 finishes.

“I never even dreamed of doing this many when I started paddling and to think that it was 45 years ago that I did my first one, it’s beyond anything I could have expected.

“You really cannot put 46 years of paddling into a few sentences but the race has changed hugely over the years!” he added.

Despite having finished 45 editions of the Dusi in a row Wheeler is approaching the 2017 edition with just as much caution as he did for the previous 45 as he diverts his gaze to potentially going over the half a century mark.

“I’ve still got to get to Durban!” he joked.

“There are so many obstacles between Maritzburg and Durban that you can never be too sure but I hope that it all goes smoothly.

“As long as my body can keep going I am going to keep going and I want to get to that fifty mark – and beyond!

“I am feeling strong but I am more like a re-tread tyre, it’s really not as easy as it was when I was younger but I look forward to it just as much every year,” an excited Wheeler continued.