As paddlers from a wide age spectrum prepare to tackle the 2017 FNB Dusi Canoe Marathon, Caroline Henderson, Cally as she is known in paddling circles, is preparing to become the first woman over 60 years old to finish the three-day adventure in a K1 and at the same time spread the message to other women that canoeing is a sport to be enjoyed beyond the perceived age barriers.

With 12 FNB Dusi finishes under her belt she is far 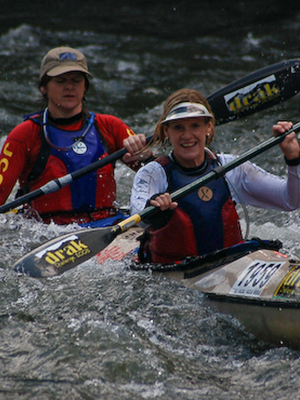 from a novice however breaking the mould and taking on the Dusi in a K1 at the age of 60 was an easy decision for her as she had a number of motivating factors.

“With this year being a K1 year I needed to motivate myself so I decided that I would take on the race in a K1,” she mentioned.

“I did my first Dusi in a K1 and then I won the Sub-Master’s category in a K1 and did one other so it is not foreign to me.

“At my age it is quite difficult to find a competent partner because I’ll be slow but they don’t realise how good a river paddler I am!

“I was also hoping that I might get a pensioners discount,” she mentioned tongue firmly in cheek.

Despite competitive women’s paddling in South Africa experiencing a renaissance at the moment the general numbers of women paddlers is not encouraging for Henderson and she is hoping that her 2017 Dusi finish will have a two-fold effect.

“When you get to 60 you think that the slope is getting steeper and steeper so I want to counter that by proving that I can still do a race like this after 60.

“I’ve long been concerned about the fact that so few women stay paddling, unlike the men who seem to be in it for life, and keep on coming back until they’ve got one foot in the grave, it seems!

“I do want people to realise how much determination, in the face of biology and of social norms, it takes to keep at it and of course hope to inspire/ encourage younger women to follow,” a passionate Henderson continued.

The three day journey from Pietermaritzburg to Durban takes its toll on all who race it at some stage or another, this is a challenge that Henderson embraces and is looking forward to the most.

“I love the ‘afkak’ of it all, the sheer adventure and challenges that the race provides as well as the adrenalin of the big rapids with only myself to be responsible for.

“The adventure, the endurance, the history, the combination of sporting skills needed, the longevity of people coming back every year. It’s a community, like Comrades, that’s what makes the Dusi such a special race.

“On the other side the portaging is the worst part for me with a buggered knee, a dicky shoulder and asthmatic lungs – it’s going to be a challenge!”

Training for the Dusi can be a difficult process for some with work and family commitments curtailing the long hours in the boat and on the road however Henderson isn’t too concerned by her disrupted training regime.

“Training’s been more erratic than would be ideal, after going away for the holidays. The running training remains a challenge, but I should be fine on the paddling.

“After the years of experience on the event I know I’ll get through it unless a big accident happens or something like losing a paddle.