As the 2017 edition of the FNB Dusi Canoe Marathon draws near, organisers and environmentalists are in the process of clearing as much of the invasive hyacinth as possible before the three-day race gets underway at Camps Drift in Pietermaritzburg on 16 February. 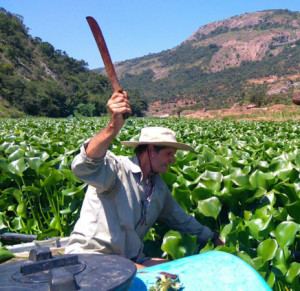 The race organisers, the Dusi Umgeni Conservation Trust (DUCT) and all of their partners have got their work cut out for them as improved water flow and soaring temperatures have led to a dramatic expansion of the water-dwelling plant.

Hyacinth and water lettuce is incredibly mobile which adds to the issue of containment and DUCT’s service provider Bart Fokkens has got teams along the entire FNB Dusi route managing the situation with the race in the not too distant future.

“It has been tough for us this year because when we took our break over December the hyacinth really bloomed,” Fokkens commented.

“Our teams are working hard at bringing the hyacinth under control but without a helicopter this year it has been difficult to kill large patches.

“We have been getting help from Umgeni Water and the Department of Water Affairs along the way which has made it easier to contain however we are going to have to do a lot more work in the build-up to Dusi!”

It has been suggested that the best solution to dealing with the hyacinth problem is a collaborative one, and if paddlers tripping the rivers ahead of the FNB Dusi see any new hyacinth infestations they should get in contact with DUCT of Fokkens.

Organisers and DUCT realise that hyacinth is going to be a major problem come the FNB Dusi, and with all hands on deck in the build up to the race winning the war is going to be a difficult task with another fresh blockage below Inanda Dam to worry about.

“We have never had to worry about this area in the past but we have a blockage at Little John below the Inanda Dam wall but there is a new section of hyacinth there.

“I believe that this blockage was caused by the floods that we had towards the middle of last year which washed the plant into that area.

“With that being said we are not too worried about it because it will get flushed out as it is not too big and we have staff there spraying it.

“A positive is that when the hyacinth is sprayed it does not grow further so we know that the bits we have sprayed cannot spread.

“The downside of that is that when it dies it gets flushed down river and can cause another block further down the river.

“Our issue is the stretch of river from the Confluence all the way to the dam, we are going to have to spray as much as we can and then I am going to have to go in and reassess what we have done, it’s a big job,” Fokkens added.

With such a large section of water to cover Fokkens’ teams will have their work cut out going into the next three weeks as they try and destroy as much of the hyacinth as possible.

“There are teams along the whole Dusi route, with three teams from Marianni and Foley all the way to the finish as well as teams from the Confluence to Dusi Bridge and Umgeni Water teams clearing water lettuce further up river,” explained Fokkens.