With just over two weeks until the 2017 FNB Dusi Canoe Marathon, South Africa’s most decorated paddler Hank McGregor fired a firm warning shot when he won the competitive Campbell’s Farm to Dusi Bridge race on Sunday. 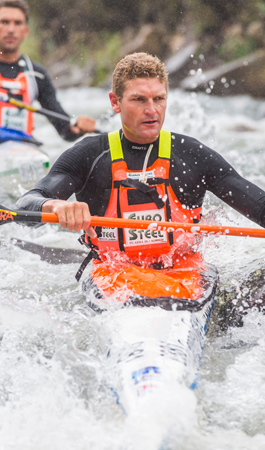 The Campbell’s Farm to Dusi Bridge race is always a strong indicator as to where the top paddlers sit in the pecking order, despite many not wanting to give too much away at this late stage of their preparations for the 2017 Dusi.

McGregor, who was undecided about his Dusi challenge until fairly late, has been working hard on his running which was evident when he managed to maintain good speed with the boat on his shoulder through the difficult portages.

“It’s good to see that I was able to run with the top guys for the whole race,” the Euro Steel/Kayak Centre ace mentioned.

“My legs are feeling strong and although I was not sure if the other guys were going flat out it gives me a bit more motivation that the hard yards in training are paying off on race day.”

McGregor had to fight back from a tricky start, but no one can question his paddling prowess which meant that if the likes of Andy Birkett and Sbonelo Khwela were going to beat him it had to be on the portages.

“I fell back a bit at the start of the race – which starts on a portage,” he added.

“I closed the gap by the time we got to the Guinea Fowl portage where it was Andy (Birkett), Thulani (Mbanjwa) and Banetse (Nkhoesa) with me before Banetse fell off the pace and Sbonelo (Khwela) had to work to catch us after a poor start.

“When we got to the tough Cabbage Tree portage it was four of us with Sbonelo catching up and then in the last three kilometers I managed to get my nose in front all the way to the line.”

McGregor is the first to admit that the younger generation is starting to dominate paddling both in rivers and on the ocean which is something that he has come to terms with as he draws on his experience to keep a clear mind during races.

“I don’t get nervous like I did when I was younger anymore. I don’t feel that sort of pressure and try and use my experience as an important element in keeping focused throughout.

“Just being able to mix it up with the younger guys still is added motivation for me and going into the Dusi this year injury free will be incredible!” he commented.

With two Dusi Canoe Marathon crowns in 2005 and 2006, McGregor’s pursuit of another title has been curtailed by a string of unfortunate injuries or illnesses but this year he seems to be in good shape with just 17 days to go until the race.

“The motivation to train and prepare for the race has always been there but either myself or my doubles partner Jasper Mocké have come down with an injury or sickness which has meant we haven’t been 100 percent.

“I have definitely put in a lot more effort over the last couple of months in the build up to this year’s Dusi than I have been able to in the past so I am confident that I will be fit and firing at the start!”

Taking on the likes of Andy Birkett and Sbonelo Khwela is going to be telling on McGregor’s running ability with the 2014 winning K2 duo having built up an impressive reputation as two of the best runners with a boat on their shoulders.

“I have worked really hard on my running and I am happy with it but as much as I am going into the race to try and win I doubt it will happen.

“It’s just great to be a part of this incredible race and my job is going to be to make sure the winners don’t win by too much!” he chuckled.