Amongst the huge field of paddlers that will converge on Camps Drift before dawn on Thursday 16 February for the start of the FNB Dusi Canoe Marathon will be four times champion John Edmonds, poised to become only the eighth person to complete the tough 120km odyssey from Pietermaritzburg to Durban forty times. 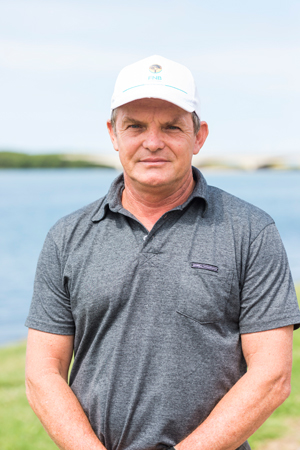 “I am just happy that I have survived this long,” joked Edmonds, who will take on the race with his brother-in-law Colin Casalis. “It is just wonderful to have had the opportunity to put forty years together where work commitments or sickness or injury haven’t prevented me from doing it.”

The 56 year old Durban North paddling enthusiast has raced the Dusi every year since his debut, with only one blemish on his copybook that prevented him finishing the annual pilgrimage down the Msundusi and Mngeni Rivers to Blue Lagoon.

“That was in 1990 when my brother Andrew and I were leading at Guinea Fowl on Day One in a great toe-to-toe dice with Graeme Pope-Ellis and Tim Cornish, and I pulled my shoulder dragging the boat down the portage. Although we finished second on that day, I couldn’t start the next day.

“At the time I didn’t know whether it was the right decision not to paddle on an injury like that,” mused Edmonds. “I do regret it. With hindsight, there was still an opportunity as quite a few guys made mistakes. But it is just a blip on the radar!”

Once he was past racing for the prized trophy, Edmonds continued to race the Dusi every year, often partnering family members who had supported him during his racing years.

“I had some competitive Dusis with my younger brother Andrew, then with my brother Chase, who was involved in a shooting accident on the border and wasn’t able to paddle for many years. Although he is only fifteen months older than me, it took me to my thirtieth Dusi for us to get into a boat together! That was a fantastic race,” recalls Edmonds.

“Then I paddled with Wendy, who has seconded the Edmonds family since 1972 – in fact she has been at the start of every Dusi since 1969 – and at the age of 60 I asked her if she wouldn’t consider changing for an easier option and to come paddling rather than seconding!

“We did two together, and she has done three altogether,” said Edmonds.

Edmonds won the race in 1985 for the first time, and repeated that K1 triumph in 1989 and 1991, a spread during the reign of “Dusi King” Graeme Pope-Ellis’ competitive days that earned him the moniker “The Dusi Prince”. He went on to earn a fourth title in a K2 race with Kevin White in 1994.

Edmonds says that while much has changed with the passing of time, much has also stayed the same.

“I think very little has changed in terms of the competitive spirit and athletic ability since the Ian Player days,” he said. “Equipment has changed a lot and the course has changed to a certain extent, in that it has become more predictable.

“There were lots of legends in the old days about sneak paths and people cutting steps and new portages,” he recalls. “A lot of that came from Graeme Pope-Ellis. People didn’t realise just how strong he was and when he upped and left paddlers in the space of five minutes, everyone thought he must have had a secret path somewhere!”

Edmonds said he was really looking forward to his race with Casalis. “It will be our third race together. We will just aim at getting to the finish and I’ll tick that 40th one off when get there,” he said.

“It is great to have a goal in mind over the Christmas holidays,” he added. “It helps you get rid of that Christmas pudding!”