As the 2017 FNB Dusi Canoe Marathon top contenders start to rise to the surface, six-time champion Andy Birkett is not letting the hype get to him as he slowly builds-up to the three-day odyssey from Pietermaritzburg to Durban starting on Thursday, 16 February. 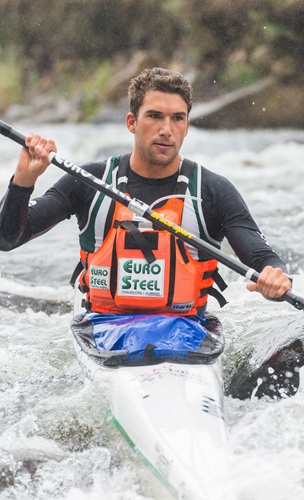 With just over two weeks until the cannon sounds the start of one of the most grueling endurance events in South Africa, Birkett is excited by the fact that there are a number of paddlers that could potentially win the race.

“I think that it is a little bit unfair to only plant the favourites tag on me!” the three-time defending champion said.

“If we look at what happened at the Campbell’s Farm to Dusi Bridge race over the weekend there were five guys that were in the running to win the race right up until the very end.

“This is really exciting and I think that all five of us could definitely win the Dusi, so I am not going to wear that tag alone!” the laid back Euro Steel star added.

The Campbell’s Farm to Dusi Bridge race over the past weekend was the final opportunity that paddlers had to paddle in Dusi-style conditions, an opportunity that Birkett feels was worth-while.

“It was great to be in those racing conditions so you could see how you reacted, my body got a bit of a shock but it was nice to race against the guys who will be my competition come Dusi.

“I don’t think guys were going flat-out and having five guys in contention for the race win was really exciting,” he added.

Birkett’s pre-Dusi formula has been a hugely successful one as he chases an remarkable seventh FNB Dusi title before he has turned 27 years-old, however 2017 has been a bit different for him and he has been excited by his preparation.

“There are still a few small things that I have to work on but that is just some fine tuning before we start racing, nothing that I am too concerned about.

“I have been really stoked with my preparations for the race this year and usually I get to this stage and am tired of training. This year has been different and I still look forward to my training – maybe because I left my training a little later this year.

“I am enjoying training and really enjoyed the race over the last weekend which is a positive ahead of the race,” he added enthusiastically.

The preparation for such a taxing event goes well beyond the physical as the top elite athletes are in prime physical condition so being mentally strong in the face of stiff competition is paramount and Birkett feels he is ready.

“I hadn’t done too much preparation on that section of the river (Day One) and my knowledge came back to me quite quickly in tough Dusi-style racing conditions which was encouraging.

“Going into these next two weeks it is important that I try and stay as fresh as possible because all of the serious preparation has been done,” Birkett commented.