2015 ICF Canoe Marathon K2 world champion and regular visitor to South Africa Hungarian Adrian Boros returns to the 2017 FNB Dusi Canoe Marathon with an eye on a potential top 10 spot when the three-day adventure gets underway on Thursday 16 February. 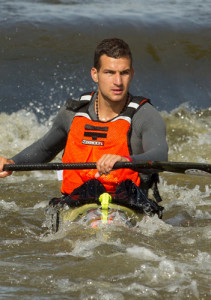 training at the race’s start venue Camps Drift in Pietermaritzburg and says he is looking forward to the challenge of taking on one of the toughest challenges in South African paddling.

“I look forward to the race every single time I come to South Africa,” the Euro Steel athlete mentioned.

“I like coming back to South Africa because the competition here is really tough and I love taking on the best river paddlers in the world.

“The Dusi isn’t an easy race for me, it is very difficult but I am looking forward to the challenge!”

Uniquely, the Dusi is as much a running race as it is a paddling race with paddlers having to take on arduous portage sections where the river is often unpaddable. Boros, who has paddled the Dusi on three previous occasions, is still recalibrating to running with a boat on his shoulder.

“I have been doing a lot of running training but I haven’t been running with a boat so it is going to be interesting to see how I go.

“Running with a boat is something that I have done so it isn’t too foreign for me.

“We will just have to see how I go with the race just one-and-a-half weeks to go!” he added.

With the ICF Canoe Marathon World Championships coming up later in the year in South Africa, Boros has been using Camps Drift as a base to train however training in his native Hungary is difficult in the winter months.

“For the last three months the weather in Hungary has been really cold so training there is difficult so it has been nice to be here in warm South Africa.

“I have been training hard and I am feeling fit and ready for the race, I am not feeling World Championships fit but I am feeling good,” he added.

Boros’ record in South African river races is solid, considering how foreign the concept of river marathon paddling is, and he is hoping that he will be able to cause a few upsets at the Dusi in 2017.

“I was 31st overall in the K1 in my last Dusi and I think that I will be able to improve on that this year.

“To get into the top 20 would be great for me but I don’t think that a top 10 is impossible but I will have to have a great race!” Boros concluded.