Former Springbok and Sharks backline star Justin Swart has relished a challenge throughout his sporting career, and is itching to start his first FNB Dusi Canoe Marathon with his own green permanent Dusi number on his kayak after finishing his tenth Dusi last year.

“I am absolutely hooked on it!” enthused Swart, who called it 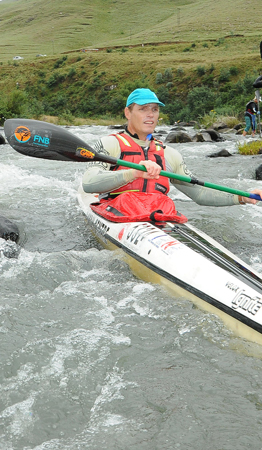 quits on his rugby career in 2003 and then transitioned to paddling.

“I was looking for a sport that was non-impact and that would be fun my whole family to be involved with,” said the 44 year-old head of FirstRand’s commercial property finance division in KwaZulu-Natal. He recalls that he almost didn’t get past the first hurdle.

“My wife and I got into a boat at Blue Lagoon and we had fallen out before we got under the bridge. It put it mildly it was not a great start.

“Luckily Mark Lewin was there and saw the disaster and took us under his wing and arranged the right boat and some good advice that got me started,” said Swart.

He persevered to the point of qualifying for his first Dusi, where he realised that this was a sport he could take part in for life.

“I was put in a celeb batch with the guys who had done 25 or more Dusis. I clearly remember one double crew. The dad must have been 70 odd and his son in his forties. The dad had arthritis and had to have the paddles strapped to his hands. The son helped carry the boat on the portages. And they were loving every minute of it.

“That’s when I realised that this was something that I could too, one day, share with my two boys,” he said.

He has already shown off his 11 year old son at the Short Course races at the popular FNB Surfski Series on Friday night on Durban Bay, and the father-and-son duo have an Ozzie Gladwin under their belt as well.

Novices tend to seek out boats with the prized Dusi Rat Green number stickers on to follow, assuming that the paddlers’ wisdom and experience will show them well-schooled lines down the rocky rapids. Swart just grins.

“They can follow me if they want. No guarantees though!” he says.

Amongst his ten Dusi medals have been some tough outings. Only once has he not finished, after a disaster at Hippo Rapid in the middle of the second stage that left him with a wrapped canoe. “Just the wrong spot at the wrong time,” he muses.

Last year he was confronted with another disaster when he folded his kayak at Tops Needle, shortly after the start of the final stage. But in true Dusi tradition he knuckled down, portaged over Burma Road, and went on to finish his tenth Dusi, and with it he earned his permanent green number.

Swart is thrilled to be racing in a race that is backed by the company he works for.

“It is so cool that we share such important values,” he says. “In my personal capacity the Dusi resonates with me strongly, and to have our company see those same values, and to try and add as much value as possible to the event, is exciting.

“It is a work-in-progress,” he added. “Last year was our first time, and this year we want to look at more ways to add value to the event.

For Swart the event allows him to continually set, and re-set his goals as he grows older.

“Five Dusis was the first major goal, and then my permanent number at ten. Now I can aim at 15 or 20, and then one day do the race with my sons. That would be really something,” says Swart.