Despite being the focal point of the creation of the upcoming film Beyond the River, Gauteng-based paddler Siseko Ntondini has not let the fame overtake him as he builds up confidently to the 2017 FNB Dusi Canoe Marathon from 16-18 February. 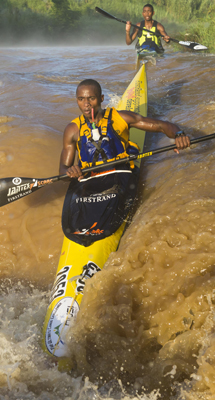 Ntondini arrived officially on the FNB Dusi stage when he and partner Piers Cruickshanks raced to an impressive seventh in the 2014 Dusi to go along with his 11th place K1, placing third in the Under-23 age category behind race winner Lance Kime and Dusi hero Andy Birkett.

The Euro Steel star’s rise through the elite paddling ranks has been a steady one and despite a disappointing 21st place finish in the 2015 K1 year his 2016 fifth place overall with the experienced Len Jenkins Jnr was his finest Dusi performance to date.

His 2017 FNB Dusi build-up has been a bit up and down with some good results, a fifth at the challenging Umpetha Challenge, followed by a sixth at the competitive Ozzie Gladwin Canoe Marathon and most recently a tenth in the Campbell’s Farm to Dusi Bridge race.

“I have been quite happy with how my preparation has been,” Ntondini said. “I have been working really hard on my running because it is always been one of my weakest aspects.

“If I can finish inside the top 10 then I will be really happy and a top five would be a huge bonus as the field this year is going to be incredibly tough!”

Ntondini has grown into one of the stand-out paddlers in the Soweto Canoeing and Recreation Club (SCARC) and will make the trip down the escarpment with an expectation that he can provide his club with a solid result.

“I have been training hard with the SCARC guys and I am feeling ready for the race next week.

“We will be making the trip down to KZN on the 13th of February so we will have a bit of time in Pietermaritzburg before the race starts.

“I have been spending quite a lot of time down in KZN racing over the last few months so I am confident that I have learnt the river again and I am looking forward to the challenge that the Dusi is going to present!” he added excitedly.

Ntondini’s best results at the FNB Dusi have come in a K2 with two top ten finishes in the last two K2 years, 2014 and 2016, however, surprisingly, he finds paddling in a K2 more difficult.

“I prefer to paddling in a K1 because you don’t have anyone else to worry about or concentrate on. You are the one that controls your own race.

“I really enjoy paddling in a K1 and I am running well now after all my training so I am hoping that helps me next week,” he commented hopefully.

Very few people can say that a movie has been based on their life story, however for Ntondini the story that Beyond the River portrays might not necessarily be a carbon-copy of his upbringing but he feels that the themes represented in the film are very relevant to what he experienced.

“This movie has not only changed my life but has shown people the story of what it is like to grow up in a township wanting to get involved in a sport like canoeing.

“One of the most important lessons the movie portrays is the interaction of two people from such different backgrounds and how you can meet someone and make a partnership work.”

Do you keep up some running fitness in the off-sea