In what was one of the inspirational stories of the 2016 FNB Dusi Canoe Marathon, Banetse Nkhoesa recovered from a stabbing incident to finish on the podium in his K2 and in 2017 he hopes to replicate that form and push for a top five when the FNB Dusi gets underway from 16-18 February.

Nkhoesa was the victim of a horrific stabbing incident in 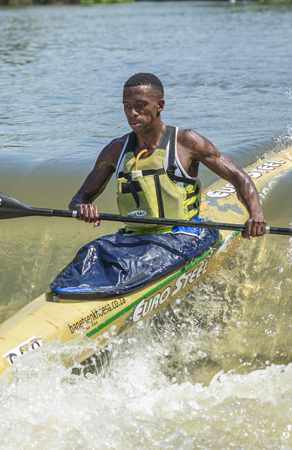 his house in Shongweni in the December of 2015 which set him back hugely in his preparation with his partner Sbonelo Khwela for the K2 Dusi in 2016.

The pair’s incredible determination and help from the Prime-based Elite Athlete Development Programme got Nkhoesa back into a boat and onto the FNB Dusi podium where they finished in third place overall – a remarkable feat after such a telling ordeal.

“My race was seriously jeopardized after the incident but I gave myself a chance and it paid off. This year I have been so much more prepared and I am really looking forward to racing the Dusi!”

The three-day race adventure takes its toll on most paddlers with a plethora of factors to take into consideration when tackling the ultimate canoe challenge, Nkhoesa’s belief is that he has grown from his ordeal and is ready for anything.

“Last year’s performance has really given me so much more confidence going into this year’s race.

“I was amazed that myself and Sbonelo could pull off the result that we did in the end with such a difficult build up – that motivates me to strive to do just as well if not better in my K1,” he added.

The 24 year-old and training partner Sbonelo Khwela have been working hard and have been in solid form in the build up to the start of the 2017 Dusi with Nkhoesa trying to soak up as much knowledge from the Dusi veteran as possible.

“I have learnt so much from Sbonelo since we have been training together and he has helped me understand the race and how to race much better.

“I have got to the stage now in my preparation where I am trying to polish aspects of my paddling and not learn too many new things,” he stressed.

With one of the deepest men’s fields assembled for this year’s edition of the race, Nkhoesa appreciates the experience passed on to him by the other top paddler ande hopes to make up for it in dedication and preparation.

“The field for this year’s Dusi is really exciting with so much talent I know that it is going to be an incredibly tough race so if I get any sort of chance during the race I have to take it otherwise I will be under pressure.

“The other guys have all done over ten Dusi’s so they know how to put you under pressure so I need to hang on and keep working hard if I get the chance.

“If I can finish in the top five I will be really happy but anything higher is a bonus for me!” a hopeful Nkhoesa continued.

With rains over the KwaZulu-Natal region not providing enough relief from the ongoing drought, Nkhoesa has prepared himself for the varying conditions that the race will throw at him.

“If there is more running then I think that that will work for me a bit more.

“The running on day one is always quite close and I think if we have to run more than usual on day three then it will be level because everyone is tired by the third day!” he mentioned.