By FNB Dusi Canoe Marathon standards the 2017 junior boys race contenders have snuck under the race’s radar with no single paddler putting their hand up until an impressive Campbell’s to Dusi Bridge performance from Stewart Little saw him rise to the top of pretenders to the boy’s throne. 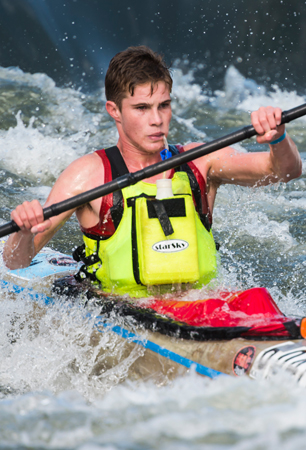 Little’s preparation for the race has taken place in the Underberg region and he feels he is as ready as he has ever been.

“I have been following Hank McGregor’s training program which I feel has benefited me a lot,” Little said. “With most of my training in the build up being up in Underberg on the uMzimkhulu River and the dams nearby, I feel that training up at altitude over the holidays has really helped my running and general fitness levels.

“I think that starting my Dusi preparation so early on in the season has been a huge advantage to me and I am now confident and ready to race,” the Sani Pass Tours sponsored athlete mentioned.

The Maritzburg College pupil is a member of the formidable MACSquad and with a number of strong junior paddlers coming through the ranks under the guidance of the experienced Lee McGregor, Little feels that his fellow squad members are going to be a real threat.

“I definitely want to win the junior section, and I am eyeing out a top 15 overall as well.

“I am also going to be comparing times with the front guys, as I am looking at the bigger picture as one day in the future it would be a dream come true to win the overall title.

“I think my biggest competition would have to be my two younger MACSquad training partners David Evans and Hamish Mackenzie.

“We have been training together a lot at the moment so we kind of know each other’s strengths and weaknesses.

“You can never count out some of the development guys. I know Change a Life’s Sandile Mtolo has been doing really well lately, so he might be one to look out for going into the three days of racing,” a cautious Little commented.

Little has completed two previous editions of the race both in a K2 but that experience should stand him in good stead as he attempts his first FNB Dusi in a K1 with an eye on the coveted junior title.

“I don’t get more nervous because it is a Dusi, I just get the general nerves about racing and wanting to do well, besides that that I don’t usually get too nervous.

“For me the big thing is to not get drawn into the excitement early in the race, but rather just keep myself fresh for the latter stages of the race,” a composed Little concluded.