The calm sunrise over Camps Drift was shattered by the 2017 FNB Dusi Canoe Marathon on Thursday, as the two pre-race hot favourites Andy Birkett and Abby Solms proved their pedigree to take commanding stage wins and over all leads going into the next two stages. 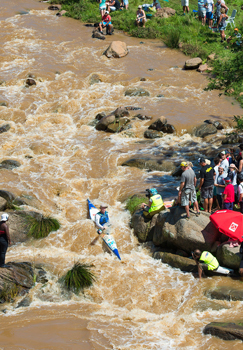 The men’s race was set up to be a humdinger with a number of paddlers’ names being thrown into the pre-Dusi hype hat however Birkett put his challengers under some serious pressure as early as the Campbell’s Farm portage.

After Birkett (EuroSteel) and Sbonelo Khwela (Euro Steel/Red Bull) opened up a gap on the chasers on the opening portage of the day at Campbell’s Farm and by the time the duo arrived at the put-in at Geoff’s Road at the end of the Guinea Fowl portage Birkett had gained a 20 second advantage and that was the last Khwela would see of the defending champion.

“I expected to come across the line today with two or three other boats,” a surprised Birkett said after the stage.

“To run away from the others today was something I really didn’t expect but with that said we had some good banter in the early stages and I love being back on the Dusi, it’s such an awesome river.”

Birkett’s efforts on the opening stage of the race were unrivalled with the 26 year-old finishing just over four minutes outside his own day one record, proof that he pushed the rest of the field.

“No one ever feels good after the opening day of the Dusi,” Birkett quipped.

“It wasn’t as bad as some years but I know that it creeps up on you when you wake up tomorrow morning. You are always going to be a little tired and sore.”

The biggest threat to Birkett’s charge for a seventh Dusi title was going to come from Sbonelo Khwela whose good form came to the fore on Thursday when he paddled away from Hank McGregor into second position.

“I have been putting a lot of effort into my paddling recently and I was happy that I could stay with the guys at the start.

“It was a good day for me but I felt on Cabbage Tree that I was running out of power but I am happy with finishing in second place overall,” a satisfied Khwela added.

Euro Steel/Kayak Centre’s Hank McGregor knew that he needed to be right at the top of his game if his challenge was to be successful however a mishap at the Musson’s Weir less than an hour from the start put the multiple Marathon world champion on the back foot.

“I took a different approach to this year’s race where I didn’t want to win the paddle at the start and give myself a chance on the first portage but unfortunately at Musson’s I snapped my paddle so I was on one paddle for a while.

“I managed to make up that time gap before the first portage but the other two guys were too strong on the run and credit must go them, that’s why they are first and second!” McGregor mentioned.

Solms’ drought of K1 titles at the FNB Dusi Canoe Marathon is under threat of being broken after the Euro Steel star surged into a commanding nine minute lead over the young Christie Mackenzie in second although it didn’t all go her way.

“Bridgitte really blew us away from the start with her pace so it took me a while to settle down into a rhythm but after that I think I had a flawless day which was satisfying,” she said.

“When I took out at the Campbell’s Farm portage Bridgitte was right on my tail again so I had to put my head down and went at my own pace from then on.

“I have a comfortable lead but anything can happen over the next two days and day three is still a big unknown.

“There are hyacinth blocks and a lot of flat water between here and the finish so I just need to take it all in my stride and race intelligently,” added Solms.

Young under-18 star Christie Mackenzie has found herself wedged amongst South African women’s paddling royalty, however following her performance on the opening stage she looks at home amongst her prestigious company.

“I was hoping for a top three today but to get a second place is completely unexpected,” the Epworth youngster commented.

“When I started this morning I didn’t have a time in mind but I just wanted to paddle and run as fast as I could because I know the other girls are so strong.

“Abby and Bridgitte are incredible paddlers and I feel a bit out of my depth but I am really happy to be here!”

Hartley’s opening day of her debut K1 FNB Dusi did not follow her pre-written script as a number of issues curtailed her charge for the top spot of the podium.

“I knew that it was going to be a tough three days and considering I swam at Taxi Rapid, rolled my ankle and had a loose pedal for most of the day it was a pretty tough day.

“There is a lot of flat water between here and the finish and I knew that the other two girls were going to be strong on the run today so I have got a chance to make up that time over the next two days,” explained Hartley.

One of the most impressive performances came from one of the Euro Steel internationals Jakub Adam who paddled his way to fourth overall. Adam won bronze in 2014 with Cam Schoeman but this has been his finest K1 display.

In what has become a large Under-23 category Mthobisi Cele of Martin Dreyer’s Change a Life Academy was the strongest on the opening day with Khumbulani Nzimande and Murray Starr chasing him.

Mvelo Ngidi has got himself a two-and-a-half-minute buffer over second place Stewart Little in the Junior Boys race with Under-16 David Evans the next best placed junior paddler.