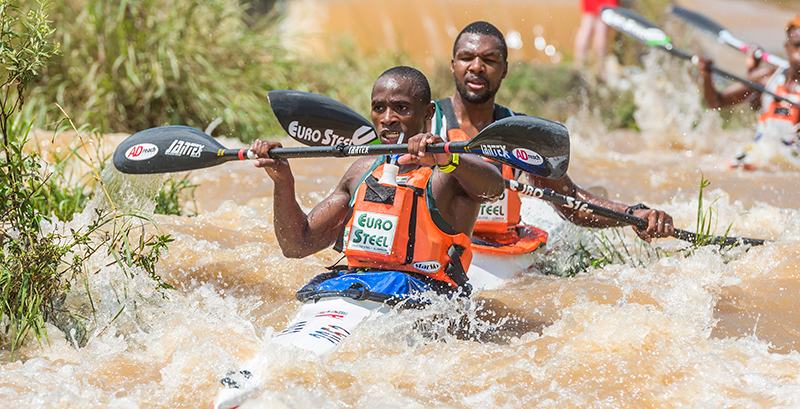 With the training programmes for the FNB Dusi Canoe Marathon elite hiking up a notch, Siseko Ntondini and Sbonelo Khwela fired an ominous salvo at serious title contenders at the Ozzie Gladwin Canoe Marathon, presented by Parklane Super Spar, this past weekend.

The race saw a measured and tactical approach from the Euro Steel pair as they paddled smartly before using the final uphill portage to take the lead and ultimately secure the win.

Throughout the paddling section of the Ozzie Gladwin the duo never let the front few crews out of their sights with the knowledge that they were going to be strong on the portage section, showing an assurance in their ability and a confidence that will be vital come the Dusi in February.

“I was really happy that I was able to win the Ozzie Gladwin for the first time,” Euro Steel/Red Bull’s Khwela mentioned.

“It was great to have a run like this early in the season and I was happy with how we went considering that we have only been training together for a week.

“We had one run with the boat in the build up to the Ozzie Gladwin so I was impressed with how we ran even though we still have a long way to go before Dusi!”

Some basic practical challenges have confronted the pair as they prepare for the Dusi, with  Ntondini hailing from Johannesburg, however the pair have worked out a plan that is going to sound alarm bells for the other Dusi hopefuls.

“Siseko is going to move down here and stay with me full time in our build-up to the Dusi next year,” Khwela explained.

“I am the guest in the house so the man of the house has to do all the cooking!” Ntondini laughed.

The pair seem to have struck up a good relationship off the water and with their positive start to their Dusi campaign they are going to be one of the more formidable crews going into the three day adventure from Pietermaritzburg to Durban from 15 to 17 February.

Both Khwela and Ntondini have forged strong Dusi careers with the former winning the event in a K2 with Andy Birkett in 2014, third in a K1 in 2015, third in a K2 with Banetse Nkhoesa in 2016 and then second in 2017.

With 12 Dusi’s to his name and a number of podium finishes, Khwela is hopeful that 2018’s partnership with Ntondini will give him his first Dusi win in four years.

Khwela’s Dusi past includes a remarkable five third place finishes along with a second place finish in 2017. The 29 year old’s determination will be to put those performances behind him and push for the ultimate Dusi prize again in 2018.

Ntondini’s eight year Dusi record includes a seventh in 2014 with Piers Cruickshanks and then a fifth with Len Jenkins in 2016 as well as a strong eighth place overall in 2017.