With a combined 37 FNB Dusi Canoe Marathons between them, the experienced pair of Thulani Mbanjwa and Jacques Theron could prove to a thorn in the side of many of the podium hopefuls at the 2018 edition of the three-day race from Pietermaritzburg to Durban from 15-17 February. 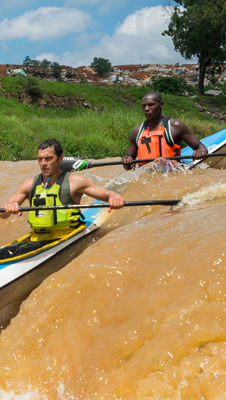 The duo might have surprised a few people when they powered their way to second at the recent Ozzie Gladwin Canoe Marathon, presented by Parklane Super Spar, however with such strong pedigree between them they could well finish close to the front end of the Dusi in February.

“I paddled the Masters World Cup earlier this year so it was the first time that I have paddled through the winter in a long time,” Theron said.

“I had a good Fish after that, and beat Banji (Mbanjwa) there so I have been staying fit in the off season!” Theron chuckled.

“Then we started talking and decided to paddle together so I am very excited to be paddling with Banji.”

Mbanjwa, who won the Dusi in 2007 with ‘Dusi Duke’ Martin Dreyer, has spent many years at the front end of the Dusi field and has defied his age recently. This years event, one of the toughest in modern times, saw Mbanjwa power to third overall with an impressive showing on the infamous final day.

Euro Steel’s Mbanjwa partnered Shaun Rubenstein to eighth overall in 2016 and with Theron the pair could well push for a spot on the podium in 2018 despite their laid back approach to the race.

“To be honest we haven’t sat down and discussed our goals for the race,” the 19 Dusi veteran Mbanjwa mentioned.

“We just want to stay fit and train well and target the 50 Miler early next year as our next goal.

“Personally I am not as fit as I usually am at this time of the year but I am hoping that I can just build slowly going into the new year.

“Sometimes you train less and you perform better so we’ll just have to see.”

The Theron/Mbanjwa partnership is not a completely new one, the pair have combined together in the past – against the same Birkett/McGregor combination that they will face at the 2018 FNB Dusi.

“We paired up for the Umko (Canoe Marathon) and came second to Hank (McGregor) and Andy (Birkett)!

“So we have trained and paddled together in the past.

“It’s great to have Jacques in the boat as he is more of a paddler but is a good runner.

“There is a lot of work for us to do but we will use this period now to get in some good base training,” Mbanjwa added.