Pietermaritzburg sisters Jordan and Cana Peek have set their sights on winning the women’s K2 title at the FNB Dusi Canoe Marathon from 15 to 17 February, and feel that they have the right mix of skills to pull this off. 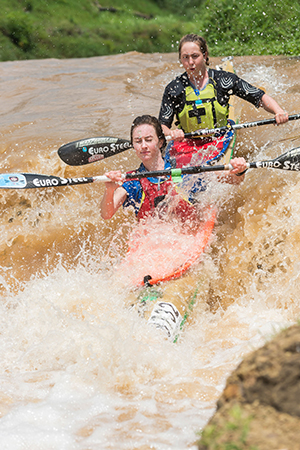 Jordan (22) and Cana (19) are both studying in Stellenbosch, which has allowed the sisters to spend time together training and preparing for the tough three day trip from Camps Drift to Blue Lagoon, and they are hoping to play to their strengths.

“The Dusi is a running race,” says Jordan candidly. “With the chance that there might be a lot of running on Day Three again, we feel this will play into our hands.”

“We have started from a small paddling base, and we are trying to get our paddling up as quickly as possible,” added Cana, during their training phase in Underberg in the Southern Drakensberg, where the sisters were putting in big mileage in their single canoes.

“Anything can happen at any stage in the Dusi,” noted Jordan. “Ideally we would like to have a good Day One, where a lead would be really important.”

“There are other women’s crews that are stronger paddlers, and they might catch us on the dam on Day Two,” added Cana. “Day Three will be key for us.”

The sisters are still experimenting with the boat set-up, and are not sure who will be sitting in front and steering the boat.

“I think it will be me!” said Jordan, the older and more experienced of the pair. Jordan was charged with the driving duties during their Fish Marathon, where they finished eighth in the ladies race, while Cana drove the boat for the recent Ozzie Gladwin presented by Parklane SuperSpar.

“Jordan just knows the lines so much better than I do, as she has done seven Dusis,” reaffirmed Cana. They will however start fine-tuning the set-up of their boat as the race gets closer.

Cana is the stronger runner, so the younger and smaller of the sisters will be at the back of the boat on the portages, pushing them up the hills.

Racing together is a special opportunity for the two sisters. Products of the prolific Epworth School canoeing programme, they are close and use that bond to their advantage in a K2.

“I am actually paddling with my best friend and my role model,” said Cana. “The whole time there is banter on the water. We keep each other entertained on the water.”

“Cana is so motivated that she is such a great partner,” said Jordan.