With the 2018 FNB Dusi Canoe Marathon just under two months away, a number of exciting combinations have surfaced in the steady flow of entries being processed at the race’s Natal Canoe Club headquarters at Camps Drift. 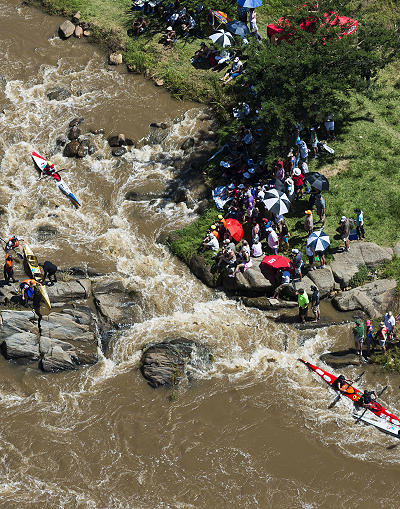 Six-time FNB Dusi champion Andy Birkett seems to be a clear favourite when he teams up with two-time race winner and Euro Steel team mate Hank McGregor. The pairs pedigree is unrivalled and with Birkett hunting down a seventh title, which will equal Dusi Duke Martin Dreyer’s achievement, it will be difficult to look past these two.

The title is by no means a given though with a number of crews eyeing the prize scalp of the World Marathon K1 gold and silver medallists. Amongst those crews is one of the only other winners of the three-day race, Sbonelo Khwela.

He, Ant Stott and Thulani Mbanjwa will be the only other previous winners of the Dusi at the sharp end of A Batch.

Khwela and Siseko Ntondini will pair up as one of the most exciting duos at the 2018 edition of the Dusi. The pair recently won the Ozzie Gladwin Canoe Marathon, presented by Parklane Super Spar, and just cemented their reputation as threatening gold medallists.

Another pair that was well in the running for a podium before they were struck down by illness in 2016 were the Houston brothers, Andrew and Alan.

The Mooi River raised youths will once again be another tough nut to crack in 2018 and should they manage to remain healthy throughout they will be a duo that could push for a top three finish.

In the ladies showdown there is a far more opaque picture with no single crew establishing themselves as heirs to the Abby Solms and Anna Koziskova K2 throne.

Solms will be absent in 2018 which adds another dimension to the showdown, leaving the door open for a pair of first-time champions to grace the top step of the podium.

Ward has settled on a partner for the 2018 showdown and she will be teaming up with Hungarian star Vanda Kiszli.

2017’s surprise package of Christie Mackenzie proved that she is at home amongst the premier paddlers when she paddled and ran her way to second overall in the ladies race.

Mackenzie and Euro Steel team mate Bridgitte Hartley will definitely be amongst the favourites for the title in 2018.

The ladies race will also have a strong sibling duo, as the Peek sisters Cana and Jordan set out to claim their first Dusi title.

Other pairs that will be potential podium finishers are the Kyeta Purchase/Kery Segal, and the junior pair of Amy Peckett/Caitlin Mackenzie.