Martin Dreyer’s Change a Life Academy will once again pose a significant threat at the 2018 FNB Dusi Canoe Marathon when the 12 K2 boats from the successful programme take to the race from 15-17 February. 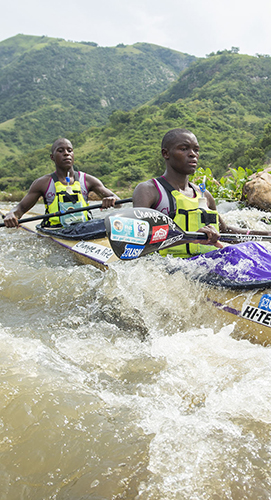 With five all-Change a Life combinations and three paddlers teaming up with other paddlers leading the charge, this part of the Valley-based programmes contingent will be eyeing a large portion of the top 20 as well as the coveted gold medal positions in the top 10.

“In the past we have won gold medals, but this year we are hoping for some more and to see some new faces in the top 10, no matter what position,” Dreyer stressed.

“Mthobisi (Cele) and Mpilo (Zondi) will be our strongest crew and they can finish in the top five. They are incredibly versatile and their win at the Non-Stop Dusi in 2017 will give them a lot of self-belief.

“They would have learnt a lot about themselves at the Non-Stop and they are still a young crew with a large amount potential.”

Dreyer’s charges have spent the majority of this festive break training hard with the team shifting its training base to Inanda Dam for a portion of this busy Dusi training period.

“Although Nagle Dam is beautiful and provides a stunning backdrop it isn’t very big and I think it’s important to give the guys a change in scenery for their long sessions.

“At Inanda we use the stretch from the dam wall to the Burma Road portage as a running route to prepare the guys for any eventuality at this year’s Dusi.

“With the drought and this being peak training time I think it is important to give the guys something different and it’s been good for them,” Dreyer added.

The Dusi is never a straight-forward contest with many different factors that could curtail a gold medal bid. Dreyer, more than most, understands the intricacies of the race and wants his Academy boys to understand that.

“Graeme Pope-Ellis always used to say that you can never trip the river enough,” he commented.

“The Dusi is never a done deal and the guys need to be prepared for all different conditions.”

Interestingly, two of the more experienced Change a Life paddlers will both be teaming up with former winners of the race in the shape of Banetse Nkhoesa and Ant Stott and Lucas Mthalane and Jason Graham.

“Paddling with Ant (Stott) is going to be great for Banetse,” Dreyer beamed.

“Banetse can blow hot and cold so to have a calm head like Ant in the boat with him will be incredible. Ant has told me that they have clicked and Banetse will add so much to the combination – it’s going to be a mutually beneficial pairing.

“For Lucas to be pairing up with a former champion in Jason is terrific, the experience in that boat is vast and they will be strong.

“To have Change a Lifers paddling with guys who know what it takes to win the Dusi is invaluable in their development,” Dreyer added.

Another Change a Life star Khumbulani Nzimande will team up with former junior champion Stewart Little for the Dusi next month.