The murky waters of potential FNB Dusi title contenders became slightly clearer after the StaminaGro 50 Miler and the new Mfula to eNanda races this past weekend, as the fancied K2 crews showed their hands ahead of the iconic three day showdown from 15-17 February.

With a healthy water release from Henley Dam on Friday, paddlers enjoyed close to ideal conditions for the Saturday’s racing and many of the this year’s top Dusi contenders turned up eager to take home maximum seeding points.

Saturday’s action was a perfect gauge as to how far along the top pairings are ahead of the Dusi and the pre-race favourites, Euro Steel’s Andy Birkett and Hank McGregor, fired their first warning shots to the rest of the title hopefuls.

The duo showed their class as they paddled to victory at the 50 Miler by a minute over the brother pairing of Alan and Andrew Houston while the Under 23 boat of Stewart Little and Kumbulani Nzimande finished in third.

In what was a strange twist, the exciting partnership of Sbonelo Khwela and Siseko Ntondini finished tenth overall. Crews tend to keep their cards close to their chest at this stage of their Dusi preparation and give away as little as possible so, the Euro Steel pair of Khwela and Ntondini could have been saving themselves.

The Houston brothers, who were third overall going into the final stage of the Dusi in 2016, will provide a stern test for other top three hopefuls next month. Fellow title hopefuls Jacques Theron and Thulani Mbanjwa were not present as a pair and the latter did the race in his K1. 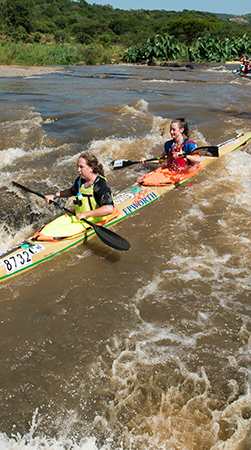 The ladies race produced one of the more interesting results with the young Peek duo of Jordan and Cana came out on top ahead of Christie Mackenzie and Bridgitte Hartley with Susan Machpech and Kelly Howe finishing in third.

Jenna Ward, who is still waiting for her Hungarian partner Vanda Kiszli to arrive in the country, won the mixed doubles category with Brandon van der Walt. Ward drove their K2 to 24th overall, just behind the second ladies crew of Mackenzie and Hartley.

Sunday’s Mfula to eNanda race saw another pair of Dusi top five hopefuls take on the Dusi day two stretch of river and the length of Inanda Dam.

It was the enterprising pair of the experienced Ant Stott and Banetse Nkhoesa who proved to be too strong for the rest of the crews as they just pipped Mmeli Cele and Msawenkosi Mtolo to the title.

Jason Graham and Lucas Mthalane finished the race in third ahead of Khwela and Ntondini in fourth overall.

Bridgitte Hartley and Christie Mackenzie then went one better on Sunday when they took home the ladies honours ahead of Lorna Oliver and Melissa van Rooyen in second and Tracey Ollermann and Cara Waud in third.

Waud and Ollermann made their intentions clear as they were the first junior girls boat on both the Saturday and Sunday.

Under 18 girls Dusi title contenders Amy Peckett and Caitlin Mackenzie did not take part together with Mackenzie being absent, however Peckett paddled with Stuart Clifton on Saturday and then raced in her K1 on Sunday.

Ward and Van der Walt combined again to win the doubles category with Nqobile Makhanya and Siyanda Gwamanda claiming the Under 23 honours and David Evans and Hamish Mackenzie finishing as the strongest junior crew for two days in a row.