The organisers of the FNB Dusi Canoe Marathon have extended the normal entries for the three-day excursion from 15-17 February as part of the race’s drive to be responsive to suggestions and comments from its participants. 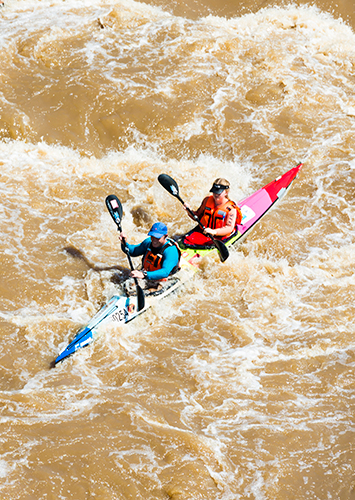 With less than a month to go to the annual event, the race has extended normal entries until 31 January, and said they are delighted with current level of entries received.

“We are really happy with entries at the moment but with the holidays and the N3TC Drak Challenge this weekend we felt that by extending entries it would give people some breathing space,” said Steve Botha, the FNB Dusi General Manager.

“Taking entries online makes it feasible to move the closing of normal entries closer to the race,” he said.

“It is a difficult financial time for a lot of people so by giving them until the end of the month it eases the pressure and we are hoping to up the already impressive number of entries we have.

“After the Drak Challenge this weekend people’s focus will shift to the Dusi,” he added.

It is a busy time of the year for paddlers who are trying to gain as many seeding points as possible or are trying to qualify for the Dusi, and the recent weekend of action on the Msundusi and Mngeni Rivers was a great gauge for Botha and his team.

“We had a meeting on Monday after this past weekend and the feedback was all positive.

“The river is clean and there weren’t any hyacinth blocks along the way which is great news.

“The paddlers had a great time at the 50 Miler and the Mfula to eNanda races so we are happy with that,” Botha commented.

2018’s focus for the Dusi is to make the race an enjoyable experience from the first paddler to the last and Botha’s logistical plans are falling into place along the route.

“We are going to have showers at the end of each day as well as at the end at Blue Lagoon.

“This will hopefully mean that people can finish, have a shower and then enjoy a cold beer while they wait for the front guys to get in.

“As I have mentioned before, all paddlers are going to have access to cold water throughout the race which I feel is important.

“We are working flat out at the moment to get everything ready but I am confident that we are going to put on a really good event for all those taking part,” Botha added confidently.