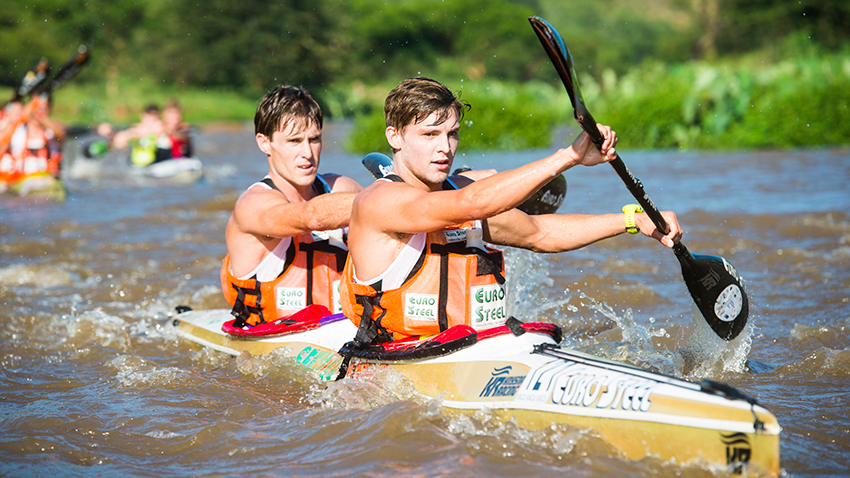 For the Mooi River brothers Andrew and Alan Houston, the decision to challenge for the 2018 FNB Dusi Canoe Marathon title was forged on the bitter disappointment of their 2016 race.

The brothers shook the 2016 race to its core on the second stage, when they blitzed the 46km leg in spectacular fashion to shoot themselves right into title contention, before Alan fell prey to the dreaded Dusi Guts on that Friday evening, and raced the final stage a pale shadow of his former self as they limped home, well off the race pace.

“That Saturday, after the disappointment of seeing Alan go down that hard, and having to go through so much just to finish the race, we agreed that we would be back to give it another go in 2018,” said older brother Andrew.

The Maties Canoe Club siblings represent the Euro Steel team and firmly believe that they can make a major impact on the men’s podium.

“We were so stoked with how things went on the second day, and then we had to deal with the nightmare of me being so sick on Day Three.

“It was mentally very tough, but we took a lot of confidence out of 2016. Being able to race into the top three has given us a lot of self-belief.

The brother share a unique relaxed understanding in the boat, with the younger and smaller of the pair Alan steering the boat, and making all the split-second decisions about which lines to take down the rapids.

There is also a lot of good natured needling and banter.

“I am the younger one but I am actually in charge of the boat,” says Alan. “When things go right, it is because of my driving and decision making. When things go wrong it is usually a mistake that Andrew has made.”

The brothers are bullish that the 2018 FNB Dusi represents a chance to make a strong impression.

“We really do see this race as a good opportunity to make a statement,” said Alan.

“Balancing the training will be vital. No one knows what will be happening on Day Three, so we are making sure we have enough in our legs just in case.

“Getting the mix right between training on the river and running with the boat on our shoulders will be crucial.”