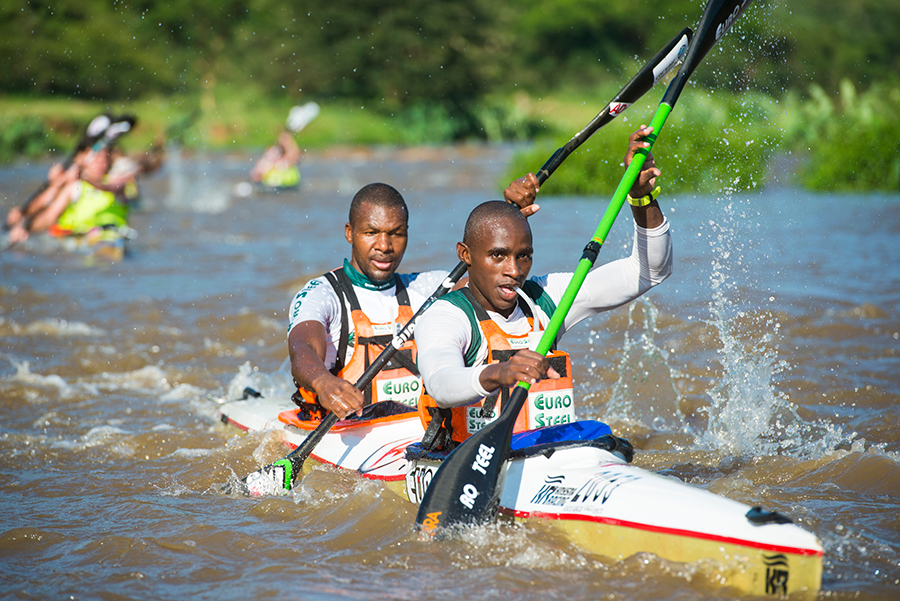 Sbonelo Khwela and Siseko Ntondini showed signs of peaking just in time for the 2018 FNB Dusi Canoe Marathon showdown when they won the men’s race, while the Peek sisters won the ladies race at the Campbell’s Farm to Dusi Bridge Dusi seeding race on Sunday.

The who’s-who of the 2018 Dusi title race were present on the start line for a race that tests running skill and fitness levels more than some of the other races, however the Ntondini/Khwela dream team finished just ahead of Ant Stott and Banetse Nkhoesa.

“I am happy with how I ran even though I had Sbonelo pushing me up the hills,” Ntondini said after the race.

“On Cabbage Tree we were just pacing ourselves and didn’t go that hard which was good because we know that we have more to give come Dusi.”

The final preparations for the Dusi should be wrapping up as paddlers prepare to get themselves mentally tuned for a gruelling three days of racing and Khwela believes that their result on Sunday stands them in good stead going forward.

“We are really happy that we managed to win the race and our preparation is going really well, which we are happy about.

“Our plan was to race hard but learn a few of the lines down the river and to see how the other pairs are shaping up, but we didn’t see much from that perspective.

“We are ready for the Dusi and we can’t wait to race,” Khwela added.

Adding some intrigue to the result, the widely fancied crew of Andy Birkett and Hank McGregor withdrew from the race on one of the portages which prevented an exciting finish to the showdown.

Khwela was unsure as to why they withdrew, however he feels that they might be keeping as many matches dry in the lead-up to the Dusi.

“We started together and raced against Hank and Andy for a long while but later in the race we looked back and they weren’t there.

“I think that they might be saving themselves for Dusi, which is a good thing.

“We didn’t get a good look at them so we will have to wait for Dusi!” he added.

It was an impressive showing from Stott and Nkhoesa who seem to be hitting their straps at the right time ahead of the 15 February Dusi start. Their second place overall has thrown their names firmly into the podium contenders hat.

Maswenkosi Mtolo and Mmeli Cele also showed signs of a strong build up when they took home third overall.

The ladies race was won by the Peek sisters, Cana and Jordan, in a curious women’s race as the elite crews all started in different batches, and effectively never races against each other during the 20km race.

The Peek siblings have now made it two wins from two in the big build up races after their victory at the 50 Miler at the beginning of the year. They were also the first Under 23 women’s crew across the line.

Second ladies home was the pair of Christie Mackenzie and Bridgitte Hartley while the young Under 18 pair of Cara Waud and Tracey Oellerman finished third.

Dominic Leslie and Sam Speed finished first in the Under 18 category ahead of the Hamish Mackenzie and David Evans. The third under 18 crew home was Minenhle Mbhele and Sandile Mtolo.

Waud and Oellermann beat fellow Epworth paddlers Amy Peckett and Caitlin Mackenzie to the finish at Dusi Bridge, while Shannon Parker-Dennison and Frances Forsythe were the third junior girls crew to the finish.