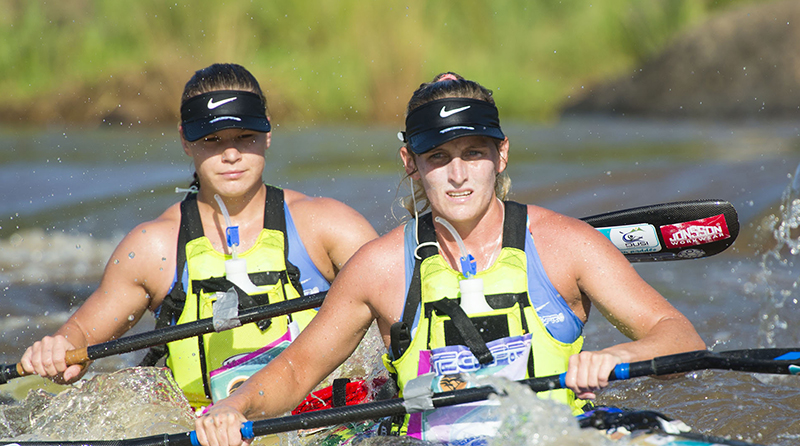 2018 N3TC Drak Challenge winner Jenna Ward has had to mix and match her K2 partners recently while she awaits the arrival of her FNB Dusi Canoe Marathon partner, Hungarian marathon ace Vanda Kiszli ahead of the 2018 event from 15-17 February.

Ward’s build up to the three-day race has been solid, however she and Kiszli will only be able to get into a boat together after 2 February when the current women’s marathon K1 silver medallist arrives in the country.

Paddling together in a K2 will not be foreign for the pair who paddled themselves to fourth overall at the 2016 Dusi.

“Vanda is only arriving at the beginning of February because she has a number of other paddling and training commitments in Hungary,” Euro Steel’s Ward mentioned.

“She has also paddled the Dusi before so she knows what to expect which means I am not worried that we won’t have that much time together in the boat beforehand.

“It is important that we spend as much time as possible getting used to having the boat on our shoulders again.”

Ward has been working hard on her running in the build up to the Dusi and in the past, she would be the first to admit, the running part of the race was always the element that she was least prepared for.

“My December training was very good and I am feeling great!”

The Ward/Kiszli pair will be a tough nut to crack on the waters of the uMngeni and uMsundusi, however many strong paddling duos have come unstuck by the large amount of running involved in the Dusi.

“I have seen that my running has definitely improved and my river skills are quite good which will keep us in check with the other girls.

“I paddled the Ozzie Gladwin with Andy Birkett and did the 50 Miler with Grant van der Walt so they were there to help if I got a bit stuck.

“For me at the moment it’s about getting through the first two days of the race and then seeing how day three goes from there!” she said.

With the seeding races out of the way the contenders are starting to take shape, Ward has had a prime seat when viewing the battles between the ladies crews.

“I still don’t think that there is that one favourite crew for the ladies title,” Ward explained.

“It’s exciting that we are going to see a close women’s race as 2016 was a one-sided race.

“To be honest, I think that it’s going to come down to the pair that can make the least mistakes.”