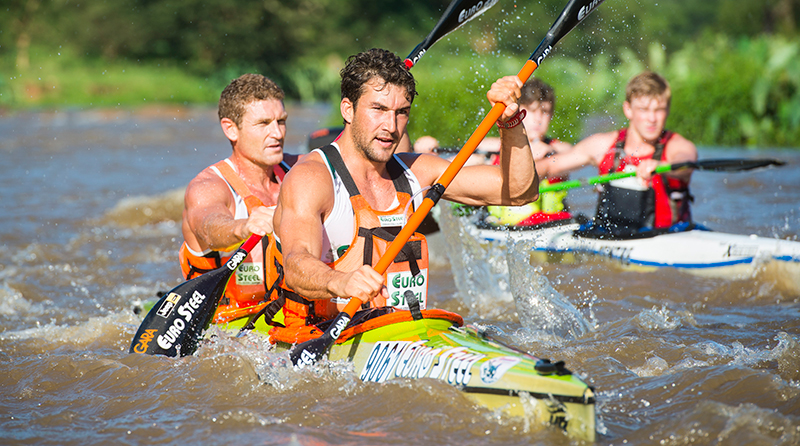 Having accepted the offer the paddle the FNB Dusi with seven times champion Andy Birkett, world champ Hank McGregor is finding the approach to the 2018 edition of the three day classic totally invigorating.

“When Andy (Birkett) asked me, I thought it would be a great idea. The world number one and two teaming up for the Dusi – that’s not going to happen that often!” he quipped.

“What I didn’t see coming was the way we would be doing our running training. Shortly after Andy and I agreed to do the Dusi together I was contacted by his running coach, and suddenly there was a running programme!”

“I have never had a running coach or training programme before. I used to just run as part of my training, some of it with a boat.

“Now we have a really thorough, intensive programme that we are following, and it is feeling fantastic!” said McGregor.

McGregor spent much of the end-of-year holiday in Underberg where he kept up the thorough running regime, enjoying the added benefit of training at altitude.

“I have always come into the Dusi as a strong paddler, but my running hasn’t been as strong as some of the other guys.

“The running programme will change a lot of that,” he added. “I am feeling so good running now, with the mix of hill sessions, endurance and running with the boat, that I might even target a Comrades after this!”

McGregor has also settled into a comfortable arrangement with his Euro Steel team mate Birkett, who has been the dominant force in the Dusi during the past decade.

“I told Andy that I am happy to let him drive the boat. He will run at the back of the boat and it will be his job to push me on the runs.

“I will provide the power from the back cockpit on the water,’ he added.

The combination of Birkett and McGregor has quickly been seen as a Dusi dream team and they will start the three day race as out-and-out favourites to claim the 2018 K2 title.

There is an added incentive for McGregor, who turned 40 recently.

“Not that many Veteran paddlers have won the Dusi,” he points out. “I think Graeme Pope-Ellis holds the record for winning the Dusi at 43. When I won it with Martin Dreyer he was a veteran. So it would be cool to join that group.”

What is noticeable is the clear spring in McGregor’s step, as the new partnership with Birkett reinvents his approach to the country’s oldest and most famous canoeing race.