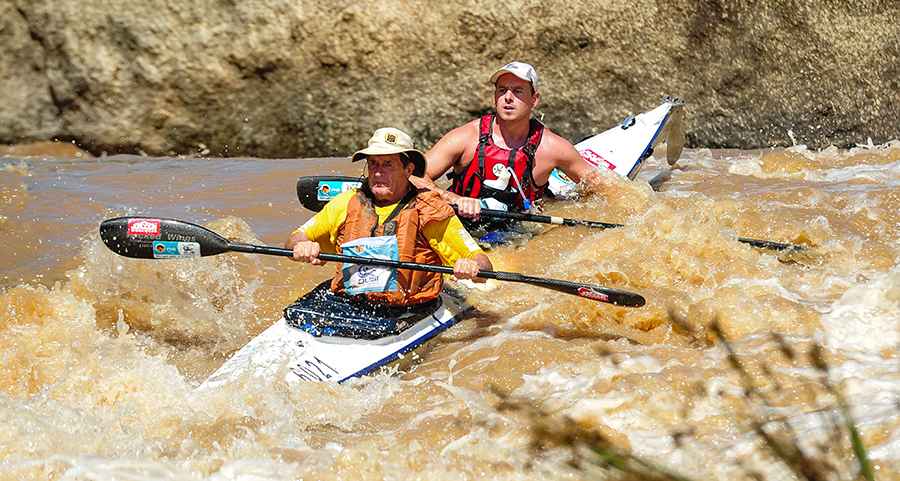 No matter what happens at the front of the elite men’s and women’s races in the FNB Dusi Canoe Marathon from 15 to 17 February, the biggest record that is poised to be broken will fall to a modest 67 year old Pietermaritzburg man aiming to break the great Graeme Pope-Ellis’ record for most Dusi finishes.

Lyle Wheeler has completed the tough three day odyssey from Camps Drift to Blue Lagoon 46 times, equalling the record held by the “Dusi King” Pope-Ellis, and as he prepares to race another Dusi, he is adamant that he will always be secondary to Pope-Ellis, even if he earns his 47th medal this year.

“I am truly blessed to still be racing the Dusi, when some of the other guys who have raced with me over the years like Neil “Tups” Tupper and Rob Bourne-Lange are not paddling anymore,” says Wheeler.

“I still get nervous and excited, and while it will be nice to get the record, I am not even thinking about it, because so much can happen on the river that you have to take it one day at a time, one rapid at a time.

“If and when I get to the last stretch coming into Durban, I will say a quiet word to Graeme (Pope-Ellis) just to remind him that he is, and always will be, the greatest,” said Wheeler.

The Pietermaritzburg septuagenarian is thrilled to be paddling with his son Billy, having done the Dusi with many other members of his extended family over the years.

“Billy is largely deaf and doesn’t paddle with his hearing aid, so we have developed a way of communicating together when we paddle,” explains Wheeler.

“He anticipates where I am going to steer the boat by the way I turn my head. He has become excellent at reading the strength of my stroke, and I also hold up a few fingers on one hand when I want him to speed up or slow down,” he added.

Wheeler is a cult figure in the race and gets a warm welcome from all the paddlers around him in the race, where his trademark old floppy white hat stands out in the crowd.

“I love the fact that paddlers tell each other follow that old ballie with the white hat because he knows the way down the river,” he chuckles.

He also thrived in the tough conditions unexpectedly meted out to the paddlers on the final stage last year when the water release from Inanda dam failed to materialise.

“The other paddlers got to realise what the Dusi is all about!” he gushes.

“Sure, it was tough and a long day, but I promise you, that 2017 medal will always be at the top of their trophy drawer, and the one they talk about the most,” he says.

While Wheeler actively reverses out of the limelight as much as possible, he is excited about the privilege of starting in a special batch for the paddlers that have done 40 and more Dusis.

“That is really special,” he gushes. “And the best thing about that batch of five boats is that it tells the story of what the Dusi is actually all about because almost every boat is made up of family members paddling together.” He says.