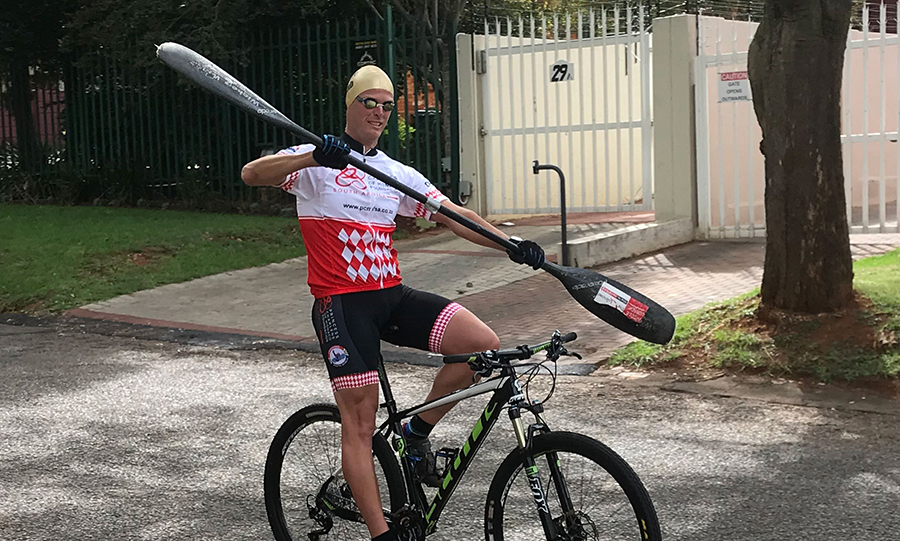 2000 Olympic silver medallist and record setting Deaflympics star Terence Parkin will conclude his mammoth 902km journey from Johannesburg to Durban in aid of the Princess Charlene of Monaco Foundation by paddling the 2018 FNB Dusi Canoe Marathon from 15 to 17 February.

The renowned swimmer will be raising funds for Princess Charlene’s foundation that will be focusing on drawing awareness to the dangers of water and promoting drowning prevention amongst deaf schools.

Being brought up around events like the aQuellé Midmar Mile and the FNB Dusi Canoe Marathon meant that Parkin has had developed a strong connection with them over many years, and with the planets aligning in 2018 he felt it was a perfect opportunity to take on such a daunting challenge.

“KZN is my home province (although I am based in Johannesburg at the moment) and I have grown up with the Dusi and Midmar Mile every year.

“When I saw that Midmar and Dusi were close together, I decided to join them with cycling and running in-between,” Parkin added casually.

Parkin famously saved a young seven year-old boy from drowning in Johannesburg in 2011, but for the 37 year-old the journey he is undertaking, which includes riding over 700km from Johannesburg to Howick, swimming the Midmar Mile eight times, then running from Howick to Camps Drift for the start of the Dusi, is geared towards helping deaf children.

“I am an ambassador for Princess Charlene of Monaco Foundation that aims to save lives by reducing drowning through water safety programmes,” he said.

“I am bringing this to deaf children across South Africa. I need to raise funds so that the programmes can be implemented in schools for the deaf and in deaf communities. I hope to create awareness, too.”

For a seven-time FNB Dusi veteran, paddling training has been on the back-burner due to his hardcore mountain biking schedule. He will be paddling with a Dusi veteran in the form of 15-time finisher Mark Mulder.

“I have been doing a lot of training, mainly cycling and swimming, not much paddling though but I am confident I will manage as I have before.

Parkin, who has taken to adventure racing, decided to make this journey one to remember and tried to make it as punishing as possible for himself.

“I was inspired by the ELB Extreme Challenge which is a race between runners in a relay and cyclists from Golden Gate to Afriski or from Johannesburg to Pietermaritzburg.

“I have done the Joburg to PMB race twice and the Golden Gate to Afriski race once.

“Despite this I am feeling a bit nervous about the mountain biking leg of my 902km challenge because some of the terrain to Afriski can be really tough,” Parkin added.