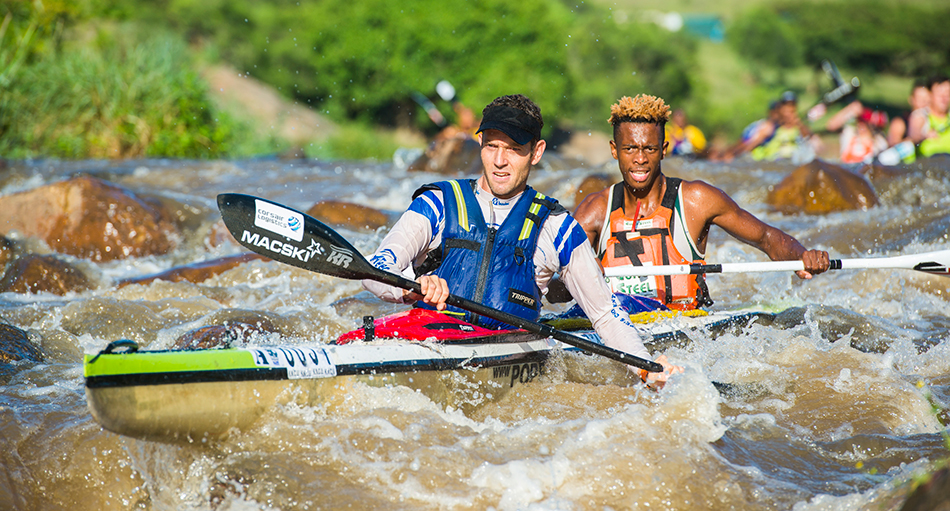 As the FNB Dusi Canoe Marathon race week dawns, a crew that has flown under the radar for much of the build-up are the young and old pairing of Ant Stott and Banetse Nkhoesa, poised to disrupt the sharp end of the field from 15-17 February.

The duo, which got together after the 2017 Ozzie Gladwin Canoe Marathon, is an unlikely combination; however Stott believes that they are in the best possible shape going into the 124km journey to the coast.

“When the World Marathon Championships was in Pietermaritzburg I targeted that as a goal and I realised that I had done so much hard work to get fit and strong for it that I decided to work towards Dusi after that,” four-time Dusi winner Stott said.

“I made it known early that I wasn’t committing to a specific partner until the last minute and I saw that Banetse was paddling with Alex Masina, who wasn’t going to paddle the Dusi.

“I made a call to his coach Craig Mustard and we trained together from then.”

The Change a Life/Euro Steel duo has been working hard preparing for this years’ race, with a very loose eye on the overall title.

“There are some great crews and you can’t really look past the number one and two in the world in Andy (Birkett) and Hank (McGregor) but we would obviously love to win the title!

“It’s been 20 years since I won my first Dusi, but we will be in the shadows ready to pounce should anyone make a mistake!”

Mixing the young and old is often a recipe for success with both parts contributing in different ways and despite Stott’s experience he has embraced the partnership that they have developed.

“It has been a great partnership for both of us, I think. Banetse is so positive and filled with so much energy and has that ‘anything is possible’ attitude which is great!

“He just wants to train harder and harder and get better and better but I think that my experience has helped him to concentrate that training and has maybe helped him hold back a little,” Stott explained.

The 25 year-old Nkhoesa, who finished third with Sbonelo Khwela in 2016, went into the last K2 showdown on the back of a terrible injury that punctured one of his lungs in December 2015.

To be able to go into this year’s race fully fit is something that Nkhoesa is not taking for granted.

“I am so incredibly excited for this year’s Dusi, it’s hard to explain!” he mentioned.

“I am the fittest and the strongest that I have ever been and I have learnt so much from Ant over the last few months.

“From how to train correctly and how to race smart, he has taught me so much and I cannot wait to race!

“When Ant and I started paddling together everything has fallen into place,” he added.