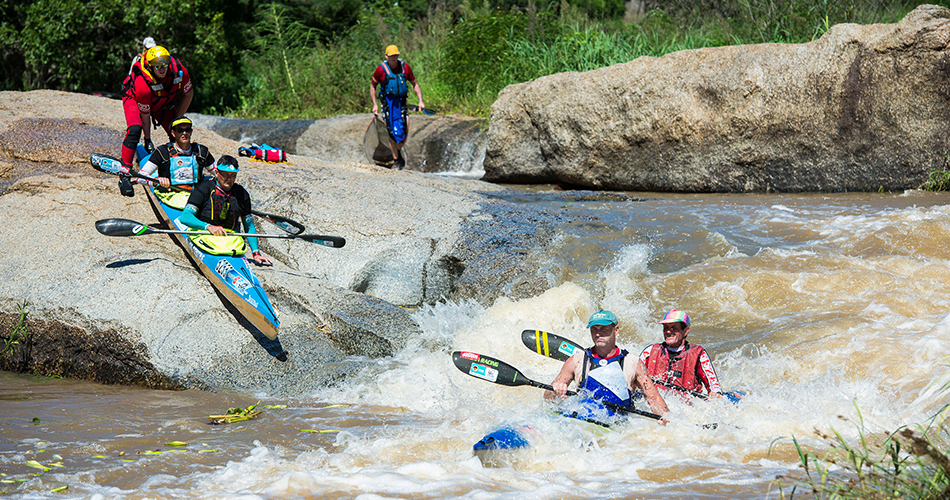 The 67th edition of the iconic FNB Dusi Canoe Marathon looks set to live up to all of the pre-race hype as the country’s finest river marathon paddlers fight it out between Pietermaritzburg and Durban from Thursday to Saturday this week.

The duo, whose rivalry has blossomed into a friendship, will undoubtedly carry the favourites tag onto the start line at Camps Drift.

Euro Steel’s Birkett has won seven of the last eight Dusi’s, his only blemish being a fourth in 2013 in the K1 showdown that was won by Lance Kime. 40 year-old McGregor’s last Dusi triumph came in 2006 when he won with Martin Dreyer to go with his K1 victory to year before.

With nine Dusi gold medals between them, the second most in 2018 being Ant Stott with four wins, and a punishing training program the smart money will be on them to reach Blue Lagoon first.

The Euro Steel/ADreach pairing will be an intimidating force with the boat on their shoulders but their ability to navigate the Msundusi and Mngeni Rivers will be paramount if they are to mount a significant threat.

Ntondini is no stranger to the top ten of the Dusi and Khwela has spent the last five years in the top three but only has one victory to show for it. This drive for the top step of the podium could well fuel their challenge over the 124km journey to the coast.

Amongst the other title contenders will be the Mooi River brother duo of Alan and Andrew Houston as well as the experienced Ant Stott who will be paddling with the exciting Banetse Nkhoesa.

The Houstons, who were sitting in third place overall in 2016 before illness got the better of them before the start of the final stage, are an organised crew that will be strong through the water as well on their feet and could provide the recipe for an upset.

It’s been a quiet build up for Stott and Nkhoesa but they too have the pedigree and the drive to push the favourites. It has been 20 years since Stott won his first Dusi title and he is hoping for a fairy-tale in 2018.

The ladies race at this years’ Dusi showdown is going to be a mouth-watering affair with no one specific crew standing up and owning that favourites tag.

If one could separate the top three pairs, one might give the Euro Steel/Max Paddles backed sister duo of Jordan and Cana Peek. The two have been in strong form in the build up to the Dusi with wins at the 50 Miler as well as the Campbell’s to Dusi Bridge race setting them apart from the rest of the hopefuls.

Despite the Peek’s strong build-up to the race, they have been racing against a slightly weaker field with Jenna Ward’s partner Vanda Kiszli only jetting in from Hungary in the first week of February.

Ward and her Hungarian powerhouse Kiszli finished fourth in last K2 showdown in 2016 and with that added experience will also be a crew to watch out for. Ward’s preparation has been strong with her taking part in many of the pre-Dusi races in a mixed K2 as she hones her river skills as well as strengthens her running.

Kiszli, who is the senior K1 women’s marathon silver medallist, is incredibly strong in the back of the boat and having experienced what the race is about, she will know what to expect this week.

The third ladies crew to keep an eye on will be the Euro Steel pair of Bridgitte Hartley and Christie Mackenzie.

Mackenzie showed her prowess when she ran herself to second at the 2017 Dusi ahead of Hartley who came third, and as a combination they have gelled well in the build-up leading up to the race.

Mackenzie, who is only in her first year of under 23 will be steering the boat with the power being provided by Olympic bronze medallist Hartley from the back.

The races for the age group prizes always offer up some excitement and 2018 will see the Under 23 crown hotly contested once again.

Stewart Little and Khumbulani Nzimande have been in going well but will have a tough three days out with 2017 Non-Stop Dusi Canoe Marathon champions Mthobisi Cele and Mpilo Zondi also eyeing the Under 23 title.

From a junior girl’s perspective it looks like it is going to be a fight between two Epworth crews. Tracey Oellermann and Cara Waud have been strong throughout the pre-Dusi races and they will be up against the Caitlin Mackenzie and Amy Peckett pair for a spot on the top step of the junior girls’ podium.

Evans and Mackenzie won the Junior Boys K2 marathon silver medal last year and finished in an impressive fifth overall at 50 Miler which might give them the edge.

The first day of the 2018 FNB Dusi Canoe Marathon gets underway at Camps Drift in Pietermaritzburg at 06:00.