While the ‘Dream Team’ of Andy Birkett and Hank McGregor and the gutsy Pietermaritzburg sisters Jordan and Cana Peek basked in the limelight at the finish of the FNB Dusi Canoe Marathon at Blue Lagoon on Saturday, Lyle Wheeler snuck unobtrusively under the radar when he set a new record for the most Dusi finishes.

It is typically modest and unassuming of the 67 year old Pietermaritzburg icon, but his 47th Dusi turned into an emotional roller coaster as the broader canoeing community rallied around to pay tribute to him as he passed the mark he had shared with the late ‘Dusi King’ Graeme Pope-Ellis. 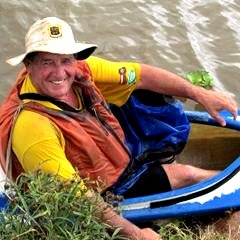 “What I loved most about Graeme (Pope-Ellis) was the fact that he was a softly spoken, modest champion, who led by example,” says Wheeler. “I didn’t expect any heroes welcome because I am just one of the guys,” he added.

So when the other four K2 boats that started in the special batch for paddlers that have done forty or more Dusis gathered on the water for the early morning start at Camps Drift, Wheeler was deeply touched by gestures from fellow paddlers that he respects and admires.

“There were some racing snakes in our batch, but there was John and Ant Edmonds and Gudgie Dixon and Brian Goble all insisting that I lead the batch down the first weir!” recalls Wheeler.

“When we got to the bottom of the weir I expected them all to take off but they formed a bunch around me and let me go down the FNB Weir at the YMCA first as well.”

“The whole way through the race paddlers were coming up to me, congratulating me and encouraging me,” he added.

On the second stage Wheeler, who was paddling with his son Billy, enjoyed the same celebrity status, and was taken aback when a group formed to escort him across Inanda dam at the end of the stage.

On the final stage into Durban he connected with former Dusi GM Brett Austen Smith and his partner Mark Holdsworth, who enthusiastically matched him stroke for stroke all the way to Blue Lagoon.

As they went under the N2 bridge, Wheeler insisted that they pay tribute to Graeme Pope-Ellis with a minutes silence.

That silence was broken by spectators and seconds at the new seconding point under the bridge clapping and cheering him on by name, before he spotted a white tent that is a traditional landmark signalling the last pull into Durban, and he yelled in true Moby Dick fashion, “Thar she blows!”

“I couldn’t believe they were calling my name and cheering,” he said. “I don’t deserve that, I am just one of the boys.

“Graeme Pope-Ellis was such a humble man, and the champions that came after him like Kevin White were the same. They led with modesty and never demanded respect,” said Wheeler.

When the group escorting Lyle and Billy Wheeler got to Blue Lagoon, they were met by his partner Maureen and his other three children Shelley, Kaylee and Quinton, and all four grandchildren.

“It is hard to explain what that meant to me,” says Wheeler. “If I had a million bucks I couldn’t buy the feeling that I felt on the finish line.”