Two crews have been singled out as heroes for the part they played in saving paddlers in life-threatening situations in the recent FNB Dusi Canoe Marathon.

On the final stage on Saturday Limpopo-based paddler Stefan Rautenbach, who was paddling with Ilse van Rensberg, dived in to rescue Kerry-Ann Lyne who became trapped underwater in the uMngeni River. 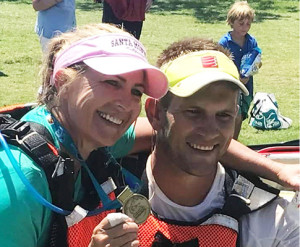 “It was a no-name rapid but it was causing quite a bit of carnage,” he recalls. “We had been knocked out of our boat trying to avoid another boat that was wrapped around a rock in the river.

“While we were emptying our boat I saw the two girls (Kerry-Anne Lyne and her partner Sarah Harries) fall out. The one went under water and didn’t come up for a while. Then I saw one hand come up out of the water. It was clearly a call for help,” says Rautenbach.

He ran and swam upstream till he got to Lyne, and helped her detach herself from her snarled splash cover, ripping it apart with his bare hands to free her from the life-threatening predicament.

“You don’t think, you drop everything and go to help,” said Rautenbach, who was paddling his third Dusi. “I lost my paddle, which was luckily returned to me at the finish, but it was good to be able to help a fellow paddler in need,” he said.

On the first stage of the race, Mark Willment and Derek Stutterheim had safely shot Musson’s Weir on the outskirts of Pietermaritzburg when they became aware of a crew in trouble on the rocky left hand line down the rocky rapid.

“I could see a guy stuck in the rapid behind this pinned boat, so we stopped, turned back and went to help,” said Willment. 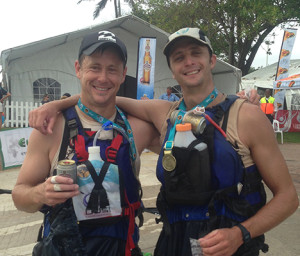 “It was a very unusual situation because it seemed he had tried to lift the back of their pinned boat and somehow he got washed under the boat by the force of the water and his rash vest got wrapped up in the rudder cables, which meant he couldn’t get free.

Willment helped rip the rash vest apart and feed the trapped paddler, who was exhausted by the effort to keep his head above water.

“We got him to the bank and left him there, he was pretty tired!” said Willment.

“I was glad to be able to lend a hand and glad it all worked out well in the end,” he added.

“I am so grateful to Mark (Willment) and Stefan (Rautenbach) and their partners for what they did,” said FNB Dusi GM Steve Botha.

“They are excellent examples of the fundamental paddling ethic of being willing to drop everything to come to the aid of a fellow paddler in need,” he added.