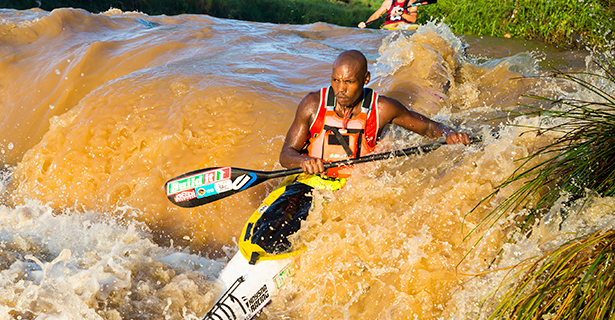 Over the final weekend of 2019 FNB Dusi Canoe Marathon qualifying races, some more title and podium contenders came to the fore at the Dash ‘n Crash and Super Bock Campbell’s to Dusi Bridge.

Both races include crucial parts of the day one route of the FNB Dusi and with some tricky obstacles and tough running the two races provide paddlers with vital insight into day one conditions ahead of the iconic race in a few weeks’ time.

At Saturday afternoon’s Dash ‘n Crash it was young Maritzburg College matric David Evans who took home the race spoils. The Under 18 star was too strong for his Euro Steel team mate Banetse Nkhoesa, who finished in second and veteran Thulani Mbanjwa who ended third.

Rounding out the top five on Saturday were Hamish Lovemore in fourth and Sbonelo Khwela in fifth.

In the ladies showdown it was the battle of the juniors as Epworth’s Caitlin Mackenzie came home in first place followed by Amy Peckett who was just over 30 seconds behind the winner.

Taking home third spot in the ladies race was another junior, Nosipho Mthembu. The Umzinyathi paddler finished 40 seconds behind Peckett.

On Sunday the Super Bock Campbell’s to Dusi Bridge race provided an interesting insight into who is in the best running and paddling form going into the Dusi in a few weeks and the top three were paddlers that didn’t really surprise.

Thulani Mbanjwa, who has been building up consistently, won the race by 19 seconds ahead of 2019’s undercover threat Red Bull/Euro Steel’s Sbonelo Khwela while a late showing from Euro Steel’s Hank McGregor suggests he will be on the start line and in good form on 14 February.

For the ever-green Mbanjwa the win over the weekend has proven that he is well and truly a contender for a first FNB Dusi K1 title but to have Khwela amongst the podium is also an ominous sign for the challengers.

Khwela seems to have taken a different approach to his Dusi preparation in 2019 and it seems that he has been using the pre-Dusi races as training rather than racing to win which shows a shift in mentality ahead of the three day epic.

To see Hank McGregor on the podium is another jolt of reality for title hopefuls. The veteran is a master in the rapids and has shown that he will be a force on the portages so he could ruffle a number of feathers at the Dusi this year.

Christie Mackenzie will be odds on favourite following her impressive third as a junior in 2017, but Haw is a previous podium finisher in a K2 with her sister Bianca so will also be one to watch and definitely in the hunt for a maiden K1 podium.

Following a strong weekend of racing young Euro Steel star Caitlin Mackenzie is pushing her case for a podium finish at this year’s race.