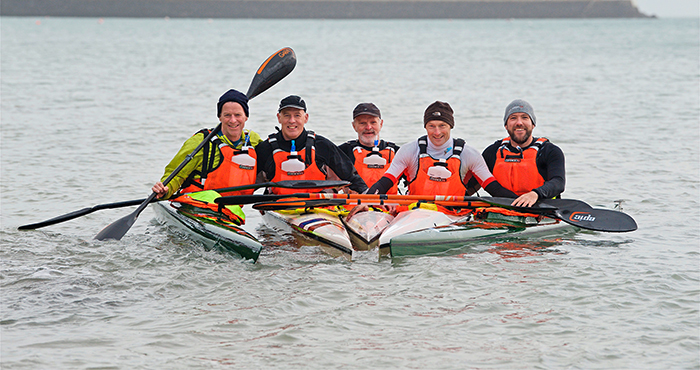 As the 2019 FNB Dusi Canoe Marathon fast approaches, the number of international paddlers taking on the 14 to 16 February Pietermaritzburg to Durban classic has swelled to its largest ever.

Along with the news of Spanish marathon ace Ivan Alonso’s arrival for the race there will be another all-Spanish crew in Guillermo Perez Garcia and Javier Gonzalez. Along with the Spaniards, Danish star Martin Friedrichsen will team up with local Trenton Lamble while paddlers from Jersey, the United States of America and Austria will also tackle the three-day adventure.

Making the trip from a cold northern hemisphere winter in Austria for the race is the pair of Simon Honc and Marcel Bloder. It will be their first trip to take on the Dusi and the race’s reputation was what influenced their decision to take it on.

“The Dusi is the legend of paddling races,” Honc mentioned from the grips of an icy Austrian winter.

“There are not many people here that know about the Dusi but those that do say that it is really tough and something that we should go and do.

“We saw a video about the Dusi and my partner Marcel asked if we should go and it was an easy decision for me as we both love river racing.”

Both Honc and Bloder have strong paddling pasts as river paddlers with both having travelled the world taking on some of the globe’s best river paddling.

“I consider myself a real all-round paddler and I love anything to do with kayaking and cannot wait to take part in one of Africa’s most prestigious races!”

Honc added: “I have been to New Zealand twice for kayaking and when I returned to Austria I started to paddle in downriver kayaks and then shifted to the racing kayaks.

“I have done numerous river marathons in Europe and was one of the main organisers of the Mur—Challenge, our own river race in Austria.

“We also want to use our trip as a way of learning how river races are organised and run so I can use some of the ideas back home.”

Also in for the 2019 edition of the race is a group of paddlers from the island of Jersey in the United Kingdom.

John Bouteloup, Steve Jones, David Priddis and John Searson will be led by 12-time Dusi veteran Johan Cornelius on their trip to South Africa and the group have all put in generous bids as part of the famous Dusi charity batch.

The group are no strangers to long distance paddling events and are veteran paddlers with the Devises to Westminster 150 mile race being their closest paddling race to the Dusi.

The event is a non-stop race that finishes in London on the Thames and often takes paddlers around 24 hours to complete.

Another event that many of them have in common is the Yukon River Quest Canoe Race, a non-stop 750km race described as the longest canoeing race in the world.

Taking on these incredible tests as well as a sound base of training in some tough winter conditions will set all the international paddlers in good stead for the Dusi this year.

Coming from a European winter into the height of the South African summer where temperatures can easily reach 40 degrees Celsius in the Valley of a Thousand Hills, that might prove to be the toughest element of the race for them.