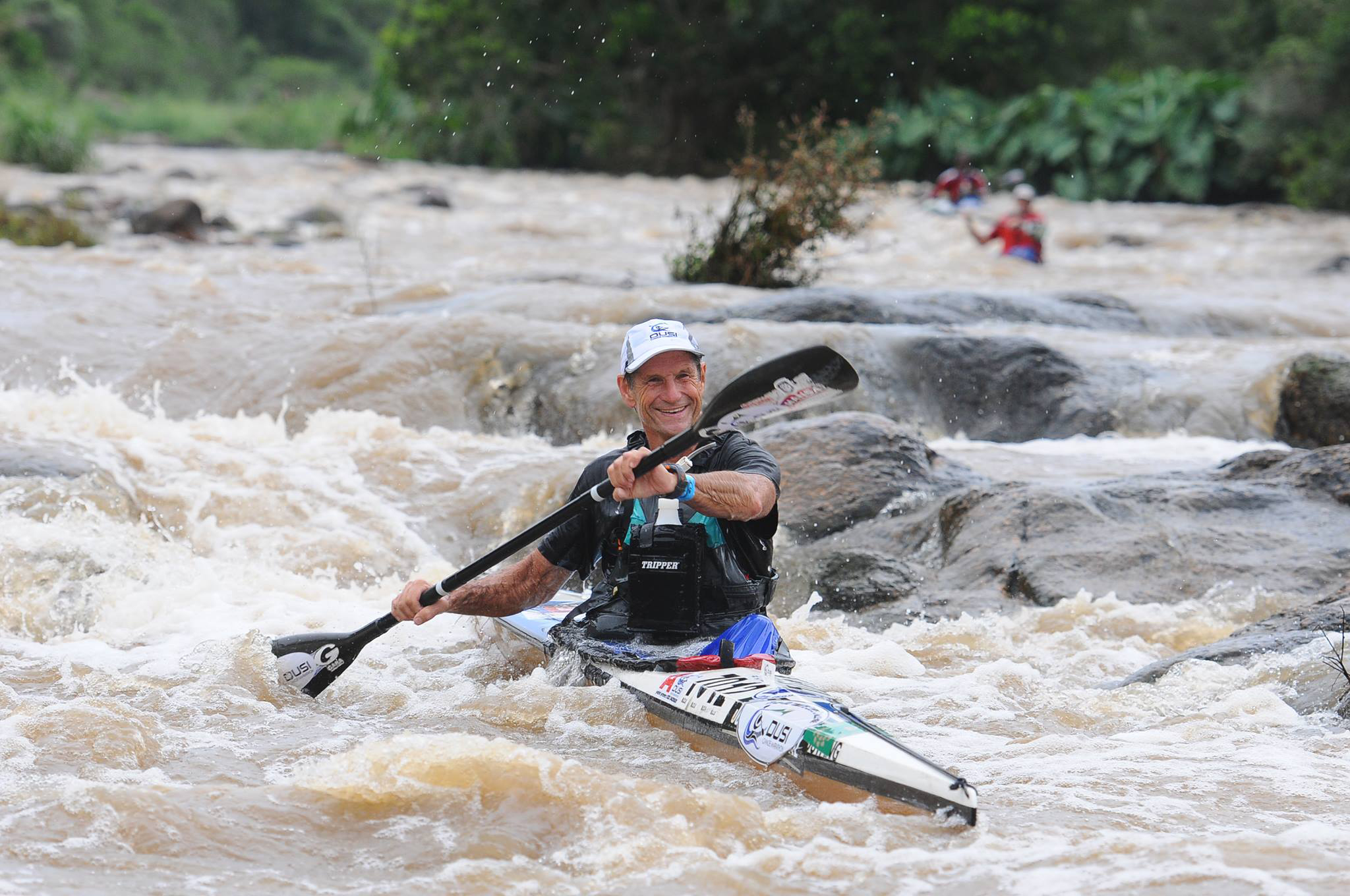 In amongst the huge field of paddlers setting off from Camps Drift at the start of the 69th edition of the Dusi Canoe Marathon will be three stalwarts aiming for their 40th Dusi medals, and another six aiming for a milestone thirtieth finish, many with unique stories that they bring to their anniversary races.

Capetonian Andre Hawarden joins Guy Haines and GV Price with the honour of starting his 40th Dusi, an annual event that has run like a thread throughout his life.

Hawarden’s fascination with the Dusi started when he read Dr Ian Player’s book ‘Men, Rivers and Canoes’ as a young Maritzburg College schoolboy and insisted on being there to watch the start of the race in 1965.

Obsessed with the race he started his first Dusi in 1966, but couldn’t complete the race. His first medal came in 1967. He went on to dominate in the seventies during the Graeme Pope-Ellis era, winning a string of singles titles.

In 1981 the race decided to allow women to paddle the Dusi, in a mixed double with an experienced male paddler. His partnership with his wife Daphne came at a time when mixed doubles racing was highly competitive, with crews like Rick and Colleen Whitton setting the pace.

Having relocated to Cape Town it became increasingly difficult to stay involved with the KZN paddling scene, and Hawarden started what was to become an eleven year hiatus from the Dusi.

His fascination with the race didn’t dim however, and when Euro Steel added him to their Dusi team in 2014, the impish Hawarden was back in the Valley of a Thousand Hills doing what he loves.

“I just cannot get over the Dusi,” he admitted before heading off for a training session that will include running with his K1 through the street around Century City mall in Cape Town.

Hawarden is a little older than fellow 40th chaser Haines, who is a very competitive masters age group paddler and has signed up tough Cape paddler Rob McLean as his partner, and the tussle for dominance with Hawarden and his partner Roy Delhove will be absorbing.

GV Price takes a totally different approach to the race and has done many of the recent editions of the Dusi as a sweep, paddling at the back of the field and helping strugglers to each overnight stop.

Pietermaritzburg Dusi stalwart Rob Humphry will start as probably the most determined paddler to reach the finish at Blue Lagoon, after his attempt at his milestone thirtieth medal failed last year, as he suffered a bad gash and then picked up a debilitating dose of ‘Dusi Guts” that saw his and partner Colin Burden withdraw after the second stage of the race.

“I will be getting to the finish. Come hell or high water!” said Humphry, who will partner Bruno Cullen for the three day odyssey to Durban this year.

Andrew Balme, who lives around the corner from Humphry, will be another paddler starting in the 25 year batch aiming for a 30th medal, as will Underberg paddler Gavin Tarr, whose stellar Dusi elite career ended with many pundits agreeing that he is unfortunate never to have won a Dusi title.

Eston die-hard Duncan Stead is also going for a 30th Dusi medal, along with Terrence Galloway and Rowan Matthews.

“The best part about the Dusi is starting in the 25 year batch,’ added Humphry. “You meet up with great friends that you have such a lot in common with, and there is a gentlemanly vibe on the river. We start behind the women’s batch so we generally have a clear river, which makes a big difference.

“It is a superb way of recognising the time and commitment for racing all those Dusis and it definitely brings me back every year,” he added.