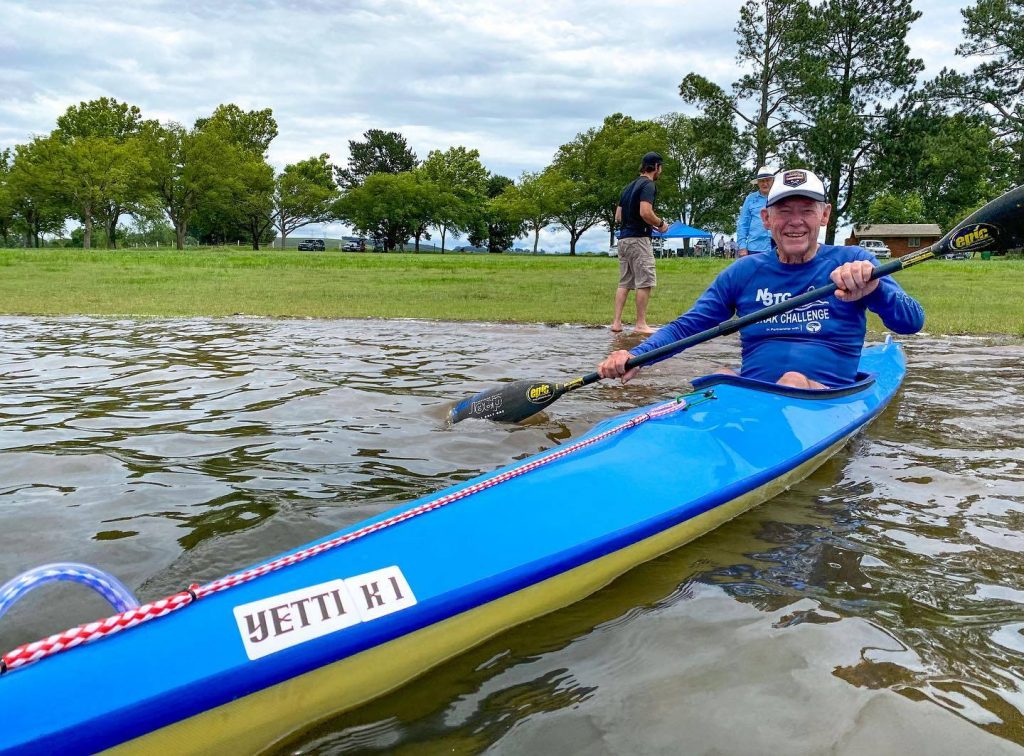 When the huge field of paddlers sets off from Camps Drift on the morning of 18 February at the start of the 2021 MyLife Dusi Canoe Marathon, Pietermaritzburg paddler Hugh Raw will almost certainly be the oldest paddler in the field, treating himself to a K1 Dusi shortly after turning 80 years old.

The sprightly octogenarian has a long and involved history with the race that has seen him champion the annual canvas Dusi paddle that replicates the early Dusi, and this year he aims to finish his tenth Dusi, which will earn him his permanent green number, to go with his ten canvas Dusis.

Modest and unassuming, Raw and his family are deeply rooted in paddling and it surprises many that he has not competed in more Dusis since his introduction to the sport in 1982, but his involvement with the race goes much further back than that.

“I was a huge admirer and friend of Dr Ian Player. I clearly recall as a small boy playing on the banks of the Dusi and swimming in the clean river, and then watching the Dusi paddlers going past at what is now Merchiston School,” he said.

Raw was sought after as a pilot to fly over the valleys during the 1970s to scout portages and observe crews running with their boats through the bush, at a stage when designing new portage route was seen as essential to any Dusi success.

Running a kayak shop he then spent ten years helping paddlers with all sorts of canoeing supplies and repairs at each overnight stop before his debut in 1982.

Since then he has accumulated nine finishers medals, six of them consecutively, but has now planned a K1 Dusi finishers medals in February 2021 as the first 80 year-old to achieved that feat.

“It will be fun to set a small mark in the history of this great race,” said Raw, pointing out that it will be a memorable family affair as he will be accompanied by his sons Shane and Darren.

“We will be paddling as an old- school group of associates. Darron and Shane will be with me all the way as competitor/helpers and we will share the portages using the nose and tail slings that they used in the early days of the Dusi,” said Raw.

Raw has followed his passion for recreating and paddling wood and canvas kayaks as were used in the pioneering days of the race, to the point that he has completed more canvas Dusis than conventional Dusi Marathons.

“I did my first canvas Dusi in 2009 and I have done them every year since then,” said Raw, whose love for big water rivers like the Umkomaas, Bushmans and Tugela rivers has rubbed off on his family, who have become renowned rough water kayakers.

He holds an unique record at the annual Fish Marathon where he has completed the race in a K3 with his sons and grandsons, celebrating three generations of the family in various combinations in recent years.

When he finishes the 2021 MyLife Dusi at Blue Lagoon on Saturday 20 February he will become the first octogenarian to get a Dusi finishers medal, eclipsing the mark set by Arthur Duncan, who completed the Dusi in a K2 aged 79 with Colin Burden, and will earn his permanent green number for completing the race ten times.

“Actually this all started at the last Dusi prize giving,” said Raw, who turned eighty last weekend. “I started planning to do a Dusi at 80, and in a K1 because I simply prefer paddling in a single. I can paddle at my own pace and not worry about keeping anybody waiting.”

While the COVID-19 lockdown has played havoc with his training and preparation, he is back into full swing with his paddling and walking, under the guise of coach Dicky Edwards.

“We got cracking again on 1 October. I walk on the trails through The Cascades with four bricks in a backpack, and paddle on the Drift regularly,” said Raw.

He completed the first race of the MyLife Dusi season last weekend when he finished the Alan Gardiner Memorial race that takes in half of the Dusi second stage, and it gave a glimpse of what to expect from his Dusi, as he paddled at a slow but steady pace, enjoying the occasion with like-minded paddlers.

“Now that I have entered there is quite a bit of interest from other paddlers to join me,” he added. “The famous Dusi Dawdlers are asking to start in our batch as well.”