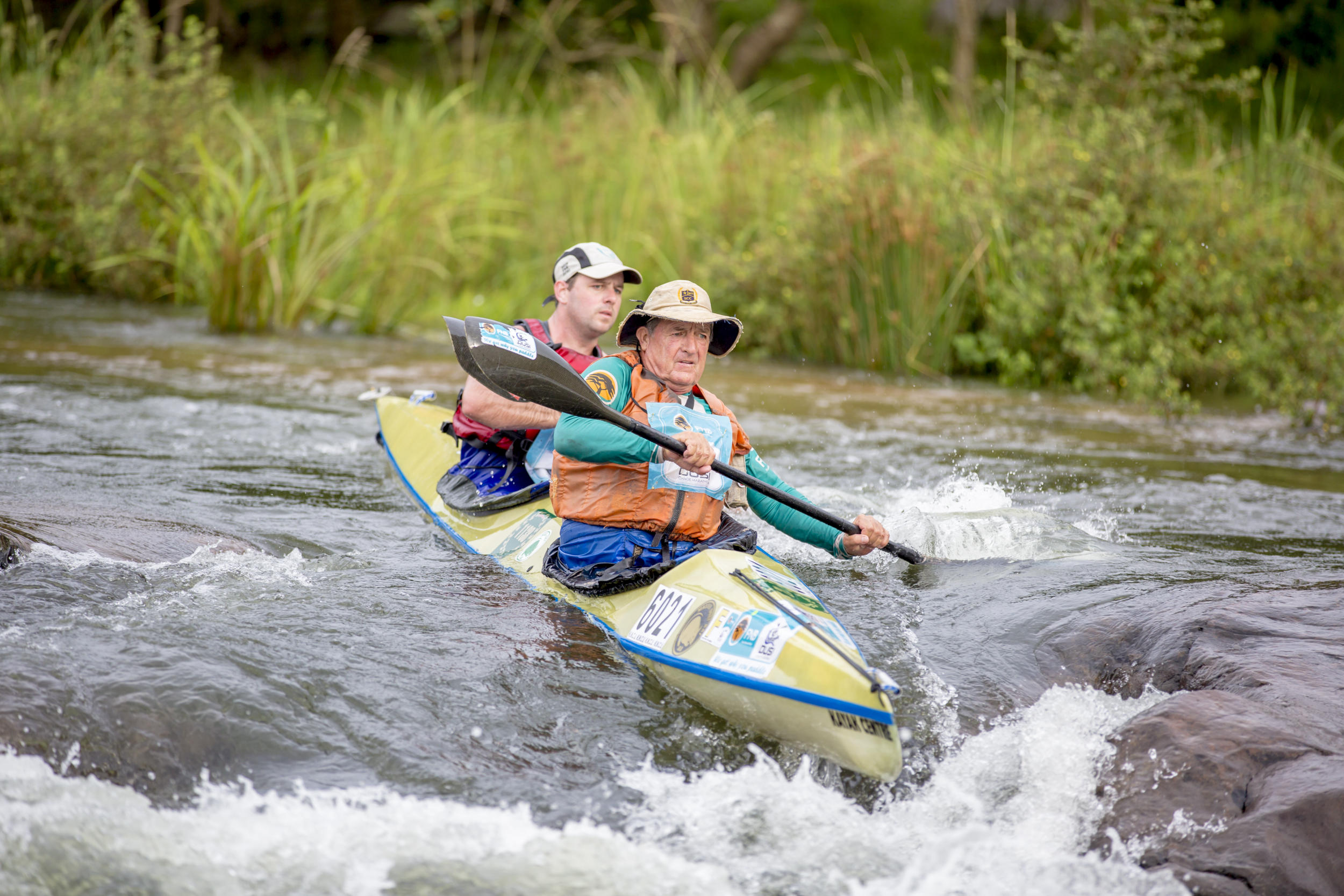 Before the media basks the spotlight on the winners of the 2021 MyLife Dusi Canoe Marathon at Blue Lagoon on Saturday 20 February, the canoeing community will come to a standstill to pay tribute to a modest 70 year old stalwart of the race as Lyle Wheeler becomes the first person to finish the tough three day race fifty times.

Wheeler has been a popular and unassuming part of the paddling community since his first Dusi in 1971 and he never misses taking part in the race, but the attention that the prospect of his fiftieth finishers medal is attracting flusters him.

“It is not about me,” he insists. “There are some many other heroes of the Dusi and I am just a tiny part of that story.

“The race simply wouldn’t be what it is today without the men and women who have organised it over the years, the runners like Piet Vorster who came into paddling to give it a go and changed the race forever, and the families and seconders, who, for me, are the unsung heroes of the Dusi,” says the sprightly farmer.

His passage down the uMsundusi and uMgeni rivers over five decades has allowed him to share many remarkable story and to get to know many of the sport’s trailblazers. Now he enjoys sharing and passing on his knowledge and memories of the Dusi.

Affectionately known as “Mkhulu”, Wheeler holds court with many groups of eager young Dusi racers, who hang on his every word when asked about the race and how it has evolved over the years.

With the 2021 Dusi being the biggest milestone ever celebrated by the 70-year old event, Wheeler has been pondering how to take on his fiftieth Dusi.

“Look I don’t need anyone’s help to get to Durban, and with it being a K1 year I could have entered in a single, but I thought long and hard about it and I want to share what will be a very special occasion for me with my son Billy, who I have done a number of Dusi with.

Billy Wheeler is deaf and it has taken some adjustments and adaptions to get the K2 crew to be able to paddle as the well-drilled team they are now.

“I love the fact that people recognise us together and give Billy the credit he deserves for paddling the Dusi,” said Wheeler, who humbly deflects any attention he attracts.

He started his first Dusi in 1971, when the race attracts a few dozen hardened competitors. “Old man Jenkins got me to do the Dusi and found me a partner. It was such an incredible adventure,” he recalls.

“We didn’t know where to go. There were no roads or paths, just cattle tracks through the bush. The river was really low and we walked and ran so much of the way.

“I was wearing hockey boots and the pain in my feet was just incredible. We tried stuffing foam into our boots to stop the sand getting in because we were walking over so many sandbanks, but it didn’t help,” he recalls.

When he did finally reach Blue Lagoon at the end of his first Dusi, he made straight for the nearby beach.

“In those days the race finished much closer to the sea than it does now. My feet were so sore and I had lost my toenails, so I just dived straight into the sea to try and get rid of the pain!”

With his trademark wide brimmed white hat, stained by countless days on the muddy river and with the insignia “Old Man River” embroidered on the front, Wheeler is a much loved and respected icon of the Dusi.

Expect that admiration to produce a remarkably emotional moment when he and his son paddle their K2 into Blue Lagoon in Durban in February.