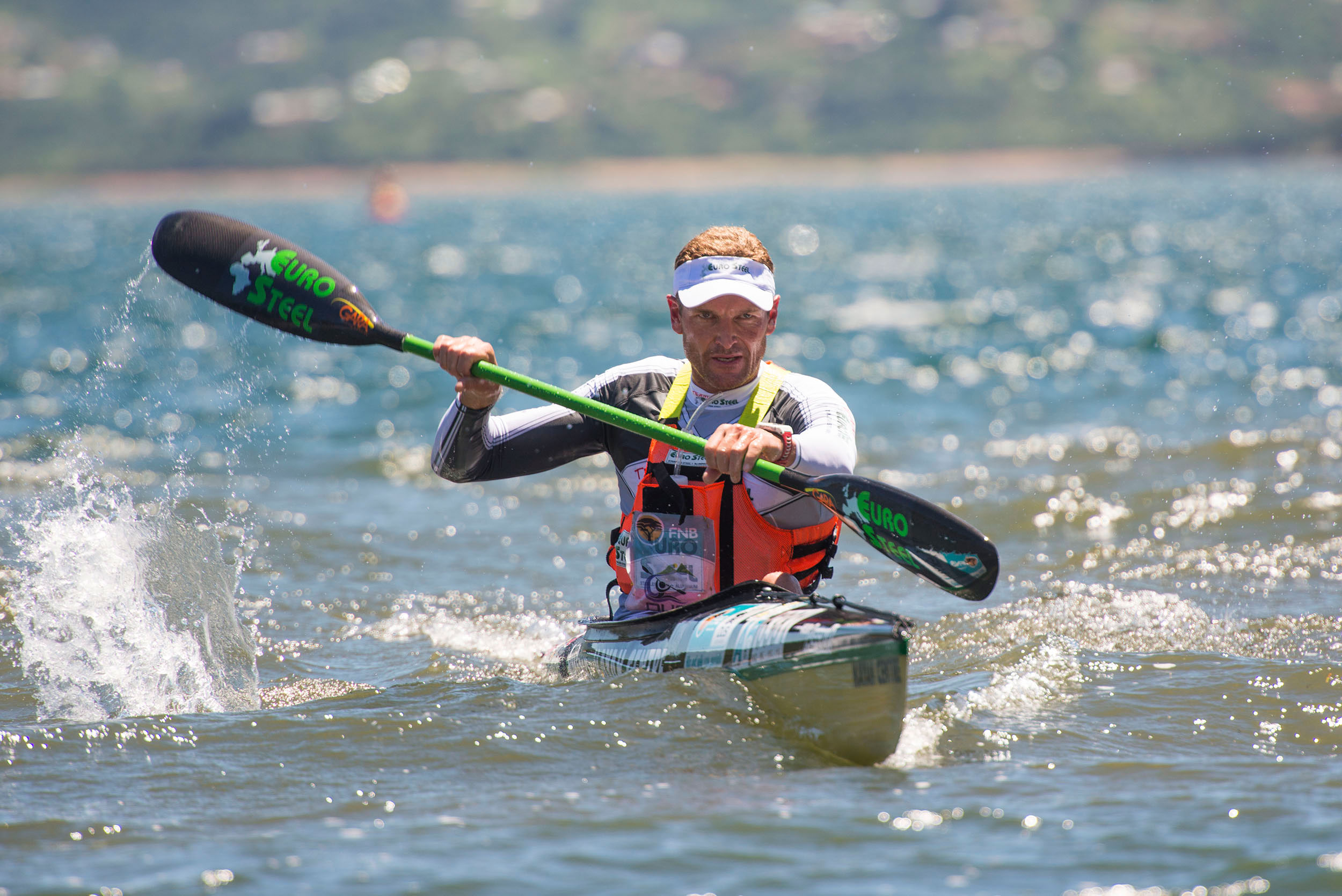 In conditions not experienced for many years, the weekend’s Kindo Inanda Dam to Durban race attracted an unprecidented field which saw veteran star Hank McGregor signal his intentions with a sprint finish win over David Evans while Jordan Peek continued her impressive pre-MyLife Dusi Canoe Marathon form with another win.

With healthy rains throughout KwaZulu-Natal during the summer months Inanda Dam has been spilling for the first time in seven years, giving eager Dusi paddlers an opportunity to scout lines and tactics for the final stretch of MyLife Dusi route from Inanda Dam into the finish at Blue Lagoon.

McGregor, who pulled off a first win of the Dusi season on Sunday, was made to work hard for his victory as the young Dave Evans continues to show why he should be classified as a Dusi contender. It was a second showdown between the two after McGregor edged the Under-23 star at the FastDrak in December.

“I don’t think it’s a case of Dave (Evans) giving me a run for my money, I think it’s the other way around!” Euro Steel’s McGregor said. “There are some really exciting young paddlers coming through and it’s fantastic to see the sport of canoeing in such a good place.

“With lockdown, people now don’t take racing for granted anymore and it’s awesome to see so many pages of results after each race.”

Looking at the conditions McGregor knows that more water will play into his hands come Dusi day three, however he also knows that the rest of the field will be well prepared no-matter what conditions they find on race day.

“With my paddling background I do think that the higher water levels do help me and with more paddling on the cards on day three, without the Burma Road portage, it will be better for me.

“The water level that we paddled on really brought back memories of what it used to be like and I had to dig deep into my memory to remember some of the lines!

“It was an awesome race and it was great to see the river in such a healthy state and it just makes racing far more enjoyable in those conditions.”

The MyLife Dusi starts in just over two weeks, but despite McGregor’s strong form he’s still not putting any added pressure on himself going into the race.

“I have to pace myself a lot more than I used to and this season we haven’t had the same build up with Drak, Cape Point Challenge and the local surfski series.

“What that has done is forced me to work harder on my running. Lockdown almost gave me a forced training camp because we couldn’t paddle!

“I am really excited for Dusi and if I can finish in the top ten I will be really happy because I have to be realistic.”

Hamish Lovemore snuck home in third ahead of Thulani Mbanjwa in fourth while Under 18 star Matthew Millward rounded out the top five.

The women’s race on Sunday saw Jordan Peek pick up her second victory in consecutive weekends to signal her good form.

Peek took home the women’s honours by over two minutes ahead of Bridgitte Hartley in second and Christie Mackenzie in third.

Defending Dusi champion Mackenzie was victorious at the Campbell’s to Dusi Bridge last Saturday before Peek won the 50 Miler and then backed that up with another win this Sunday.

Paddlers will now shift their focus to the final race of the MyLife Dusi Series, the Lighthouse Design Ozzie Gladwin on Sunday, 7 March.