Birkett raced flawlessly over the 42km from Camps Drift to Dusi Bridge, running and paddling away from the seeded men’s batch loaded with all the Dusi stars of the past decade to post an empathic eight minute overnight lead over Khumbulani Nzimande and Msawenkosi Mtolo.

“It was really exciting racing and I am super-grateful have had a clean run,” said the Euro Steel team racer. “From the word go, I was just so excited to be racing again. It feels like years and years since I have done Day One of the Dusi. 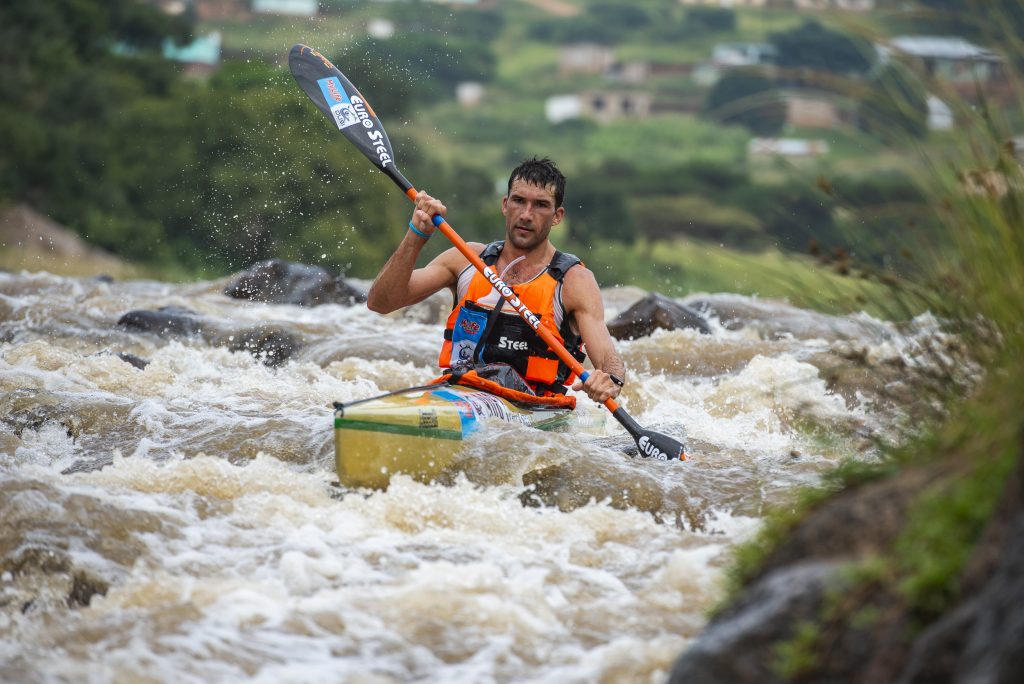 “There were so many guys putting on the pressure right from the start,” he said. “Alex Masina was the biggest challenge at the start, getting to Ernie Pearce weir first.

“I can’t ever remember there being such a big group racing out of Maritzburg, and I ended up pulling the bunch simply because I didn’t want to get caught up in the mix behind scrambling for waves.

“I normally take the portage at Pine Trees pretty easy but after Hank McGregor took part of the group on the braai take-out portage I was forced to put my foot on the accelerator!” said Birkett.

“I only realised that I was in the lead when I ran into a spider web at the bottom of the portage and I realised that no-one had come through here yet!”

Birkett was alone for the remainder of the day but never let up his intensity as he ground out the massive lead. Despite the comfort it affords him going into the second stage, he says that he will not get carried away.

“There are still two days to race and anything can happen. More than anything I just want to enjoy racing through this very special part of the country,” said Birkett.

Nzimande, who won the K2 title with Birkett last year, tried valiantly to stay with his mentor, but could only watch as the mercurial Birkett show moved gradually away from him.

It was McGregor who threw the cat amongst the pigeons by splitting the four boat front bunch up by opting to take the longer route at the long Campbell’s Farm portage, and a jittery Alex Masina who had led the race to the Ernie Pearce weir, decided to ditch his race plan and follow him.

Masina could not keep pace with McGregor and then took a wrong turn, sending him crashing down the leaderboard.

Under 23 ace Dave Evans was also part of the very fast breakaway group; but the promising youngster ran into trouble in the second half of the race with debilitating cramps, to finish a disappointing eighth.

In close to a carbon copy of the men’s race, women’s defending K1 champion Christie Mackenzie overpowered the rest of the strong elite women’s field on the river and on the portages to fully deserve her gaping seven and a half minute lead.

However she was forced to charge from behind after she capsized at Taxi Rapid while lying third early on in the race.

“When something like this happens it is so important to keep your wits together and stay in the moment. I just had to pull myself towards myself and I had a really blissful day from there down,” said the Gauteng based Euro Steel/Varsity College team member. 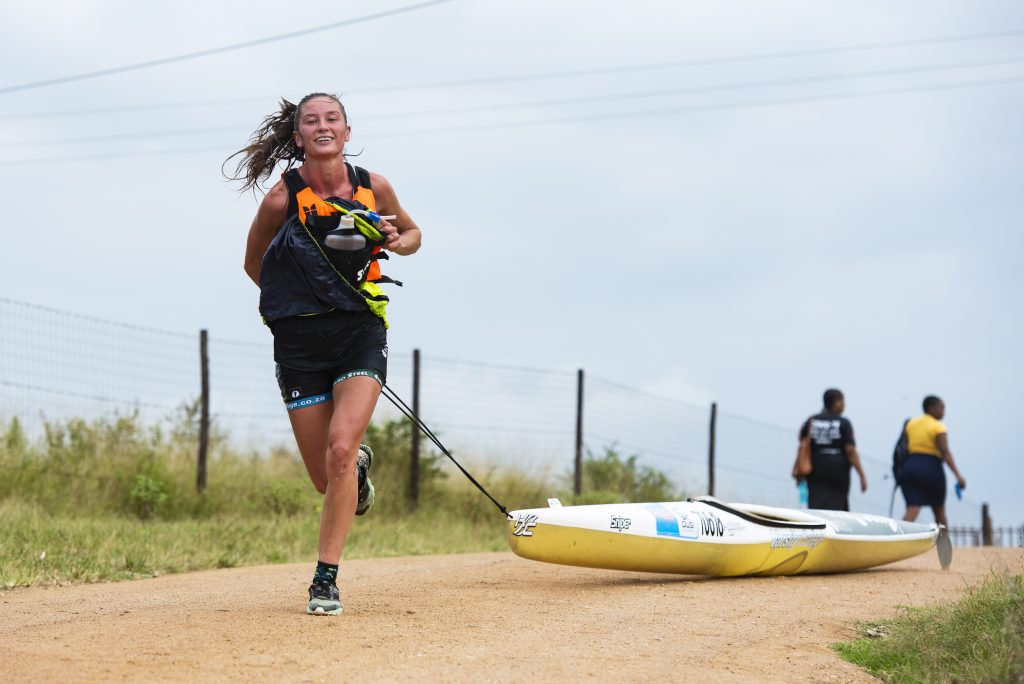 “My coach told me that the race starts at the Campbell’s Farm portage take-out. Luckily I could see the other girls ahead of me and managed to catch them on that portage and started to open up the gap.

“I have always felt my running was strong so I took it easier on the river and then went hard on the runs,” she said, adding that her many months running during the lockdown months had paid handsome dividends.

The women’s stage one podium was completed by Jordan Peek and Bridgitte Hartley. Euro Steel’s Peek holds a slender 19 second buffer of Team MyLife’s Hartley going into the Queen Stage of the race on Friday.

Largely unnoticed on the day, the Gauteng-based K3 of Marco Magno, Ryan Rodda and Alex Roberts shaved an unheard of forty minutes off the K3 stage record.

The 2021 MyLife Dusi Canoe Marathon takes place from 18-20 March 2021. More information can be found at www.dusi.co.za