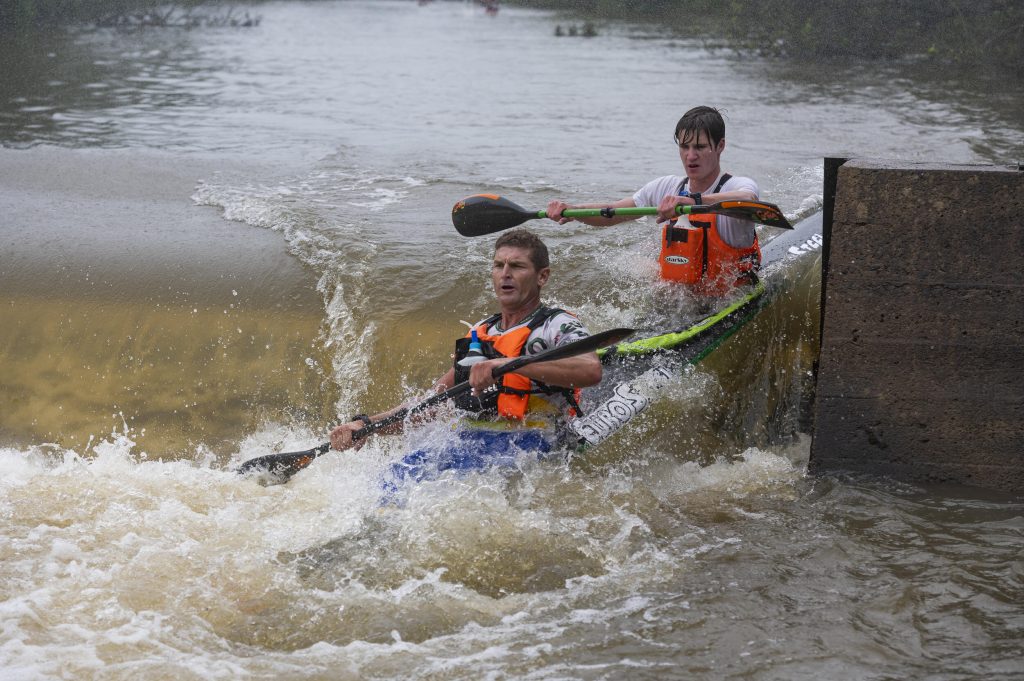 Defending champion Hank McGregor scooped a significant double on a full uMngeni River on Sunday as he won the Lighthouse Designs Ozzie Gladwin with his new MyLife Dusi partner Matt Millward and with it the prized SA K2 River Marathon title.

Over the 26 kilometre course from Albert Falls to Thornvale Farm McGregor was the dominant force and tactically steered young Millward to the 2022 title, and in the process signalled their intentions as a podium crew for the three day classic from Pietermaritzburg to Durban next month.

They held off their main challengers Thulani Mbanjwa and Msawenkosi Mtolo in a well timed break in the second half of the race to hand McGregor his seventh win at the event, winning by more than a minute, with the promising crew of Stewart Little and Bongani Ntinga making up the balance of the podium.

“It was our first major outing together.” said a delighted McGregor. “We just seemed to click and ran well.

“We had one or two things we needed to sort out during the race,” he added. “The pump inlet pulled off the seat when we put in after the portage so we wasted a bit of time there.

“We managed to break away midway through The Cascades and finished on our own,” said the Euro Steel star.

“Matt ran and paddled really well so we really enjoyed the paddle,” he added.

McGregor said he was delighted to be back racing the race after having it cancelled last year.

“At least we are conquering the races now not letting Covid conquer them like last year,” he said.

“Winning the SA K2 title at the biggest one day race in the country is an added bonus.” he said.

In the women’s race the new crew of Jordy Peek and Christie Mackenzie had their work cut out for them to stave off the strong challenge from the brand new combination of Abby Solms and Bianca Haw with the pairing of Bridgitte Hartley and Pippa McGregor always looming large behind them ready to capitalise on any errors.

“From the five women’s boats that got away at the front on the dam we got it down to three boats by the time we got to the flats on the uMngeni,” explained Peek.

“It was a tough race with the element of portaging, rapids and flat water to test the waters,” she said.

“It has been awesome paddling with Christie,” she added. “We haven’t done much time together in a boat but she was super strong today and I am really enjoying paddling with her at the moment,” said Peek.

“She has recently recovered from having Covid so it is good to know that she is fully over that,” said Peek.

The big field that took part in the race used the days paddling and portaging as key training for the MyLife Dusi in a months’ time, with the elites banking key seeding points for the big race from Pietermaritzburg to Durban, and the new MyLife Dusi Series.