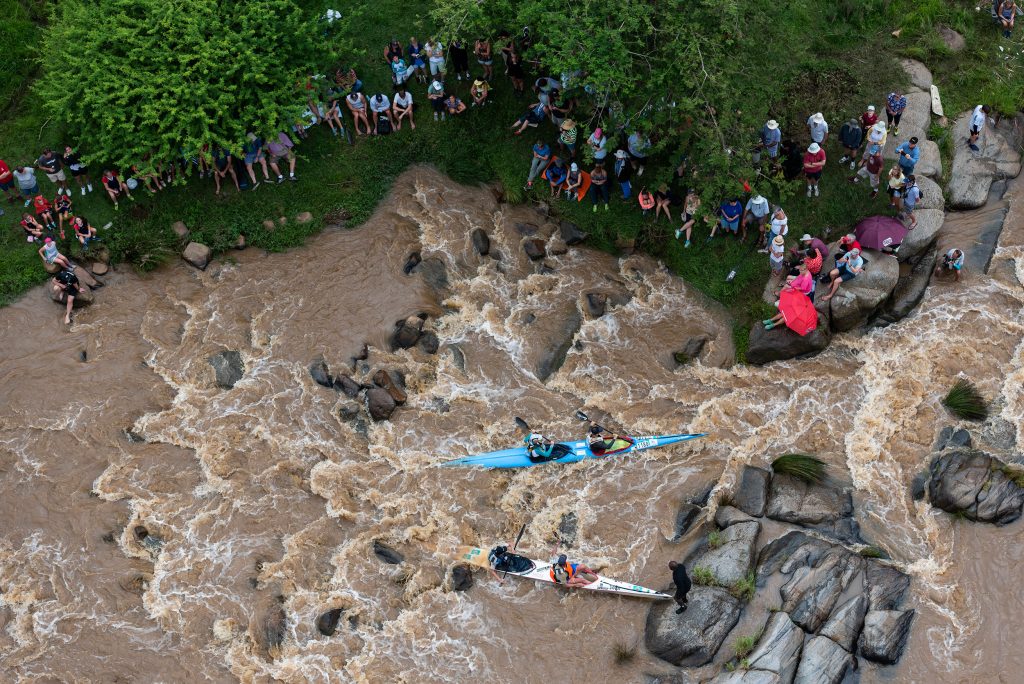 Following months of unprecedented rains throughout KwaZulu-Natal and along the uMsundusi and uMgeni Rivers, the 2022 MyLife Dusi Canoe Marathon is set to live up to its reputation as the country’s premier canoe marathon from Thursday to Saturday this week.

Following much of the pre-race hype surrounding the water quality and levels, organisers have put paddlers’ minds at ease saying the race will go ahead as usual and that this year’s race is going to be one for the history books.

This year will see over 770 paddlers take the 120km route from Pietermaritzburg to Durban hoping to finish the most iconic canoeing race in South Africa over the three days.

On both the men’s and the women’s sides of the race there are going to be intense battles throughout with a number of crews fighting it out for the overall titles and the prestige of being a MyLife Dusi champion.

East London based modern day Dusi legend Andy Birkett will once again wear the favourites tag. He is paddling with under 23 star David Evans and the Stellenbosch-based accounting student could be the sixth different partner to win the Dusi with Birkett.

Birkett’s record of eight consecutive Dusi wins stands as the current record of back-to-back wins and with the services of his Euro Steel’ team mate Evans behind him there is little doubt that they are the overwhelming favourites for the title.

Out to break the Birkett dominance of the Dusi is the Team MyLife pair of Thulani Mbanjwa and Msawenkosi Mtolo. The duo has been in good form throughout the build-up to this year’s race and will provide a stern test to Birkett and Evans.

Mbanjwa as part of the last K2 crew to win the Dusi that didn’t include Andy Birkett when he won in 2008 with Martin Dreyer. It would be fourteen years between wins for Mbanjwa should him and Mtolo win this year.

Also amongst the contenders are the Euro Steel teams of Sbonelo Khwela and Nqobile Makhanya and Hank McGregor and Matt Millward.

Khwela won the Dusi in 2014 with Birkett and has been one of the race’s most consistent performers with ten podium finishes in the last 13 editions of the Dusi.

He and Makhanya launched themselves into the Dusi frame after their impressive win at the recent Parklane Spar Campbell’s to Dusi Bridge race.

McGregor and Millward will also be serious podium contenders given their strong build-up to this year’s race. The youth and experience will be one of their strengths as Millward chases a first ever Dusi podium finish.

The women’s race could be narrowed down to two potential winners with two boats standing out from the rest as the obvious contenders for the title.

With three Dusi titles amongst them, including being the back-to-back K1 champion, Euro Steel’s Christie Mackenzie and Jordan Peek seem to be the favourites to take home the title this year, however the race could potentially be a repeat of 2019’s K1 end sprint.

Team MyLife’s Abby Solms and Bianca Haw are also winners of the race which gives an indication of how tight this race could turn out to be.

Solms showed she is in fine form when she won the recent N3TC Drak Challenge and Haw is a multiple age-group champion at the Dusi which proves their pedigree going into this year’s race and the margin for error in the women’s race is going to be miniscule.

Fighting it out for the other spot on the podium will be another Team MyLife pair, Bridgitte Hartley and Pippa McGregor; while they will have the experience of Hillary Bruss and Hayley Nixon also in the mix for the podium.

This year’s race will see another significant influx of overseas paddlers with Danish marathon paddler Martin Friedrichsen teaming up with Trenton Lamble while Spanish river marathon ace Kiko Vega is taking on the challenge with Wayne Jacobs.

Another Danish paddler in Susan Lützner returns again in 2022 to race with Loveday Zondi while the respected French canoeists Eric Lelievre and Yann Robert are also in to take on this year’s race.