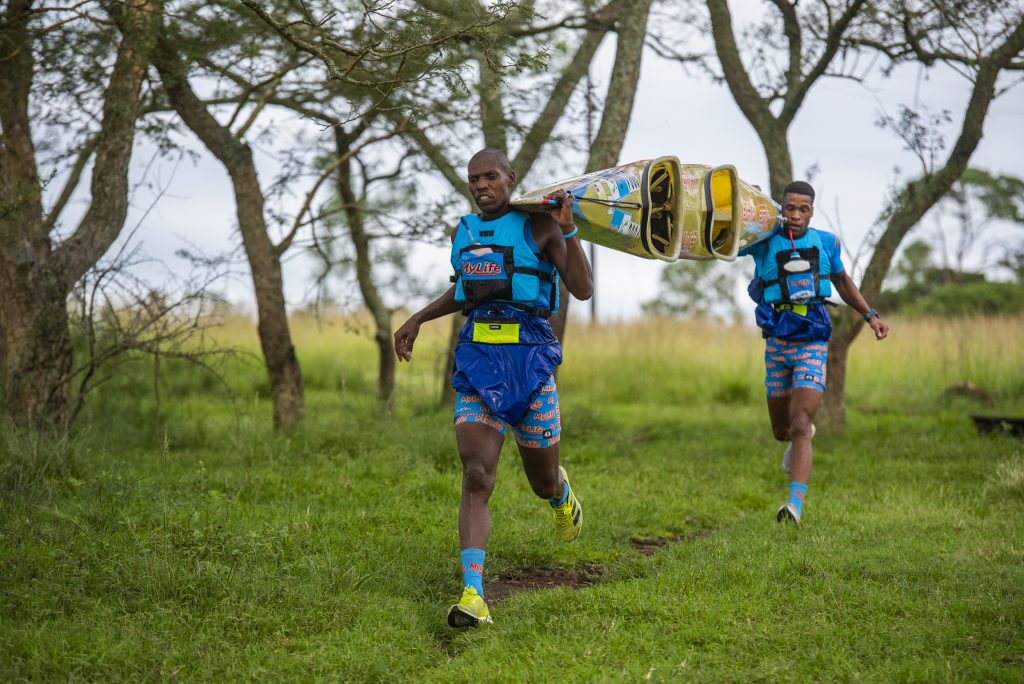 An exciting and eventful day one of the 2022 MyLife Dusi Canoe Marathon saw Thulani Mbanjwa and Msawenkosi Mtolo take the men’s line honours while Abby Solms and Bianca Haw won the women’s stage.

It was an exciting stage of racing from Camps Drift to Dusi Bridge with the men’s race taking a few twists and turns along the way; but ultimately it was a stage that saw the two favoured crews rise to the top.

The Team MyLife pair of Mbanjwa and Mtolo finished with a 33 second buffer over the Euro Steel duo of Andy Birkett and Dave Evans.

Birkett and Evans held the early advantage through Pietermaritzburg and onto the first portage of the day. By the time the crews had put their boats back in the water after the Hole in the Wall portage Mbanjwa and Mtolo had snuck ahead.

The gap at Mission Rapid was just over 30 seconds and through the Finger Neck and Cabbage Tree portages the gap neither narrowed nor ballooned into the finish.

“It was very exciting to be here and come first today but we have still got two big days to come,” Mbanjwa said.

“The youngster Msawe put a lot of power in the back and it’s great to be at the front but we need to try and stay up there and maintain the lead.”

Mbanjwa picked up a nasty gash on his arm at Ernie Pearce Weir when he was cut by the rudder of another boat, but the veteran didn’t let it phase him as he and Mtolo powered across the line to hold the overnight honours.

“When we got to the front we wanted to get as comfortable as possible because we knew the move would come on the portage.

“Our biggest plan was to get to the finish in first and we managed to do that,” Mbanjwa added.

For Mtolo it was more a muted celebration.

“I am really excited that we finished first on day one but we can’t be took excited because the Dusi is three days of racing,” Mtolo commented.

For the second team across the line Birkett and Evans, it was an exciting day of racing that can only bode well for what’s to come on Friday and Saturday.

“It was a great day out there and it was an awesome tussle with Banji and Msawe and I don’t think you can ask for much better,” Birkett said.

“There was a bit of cat and mouse with them getting away and us catching up but it was just a great day out on the river.

“Dave said I drove well but I don’t think so at all! I made a few mistakes out on the river; not being able to trip day one disadvantaged us but no excuses and I am looking forward to tomorrow.”

The women’s race was steeped in drama from the start as the Euro Steel pair of Jordan Peek and Christie Mackenzie spun out below Ernie Pearce Weir costing them valuable time.

They then proceeded to swim at the innocuous Low-Level Bridge and then again at Taxi Rapid which gave the Team MyLife pair of Abby Solms and Bianca Haw an open opportunity to stamp their authority on the race.

Former champions Solms and Haw didn’t need an excuse and took the chance to finish over eight minutes ahead of the tenacious Peek and Mackenzie while Team MyLife’s Bridgitte Hartley and Pippa McGregor rounded out the top three.

“We knew that it was going to be a day about making sure we made the least mistakes,” Solms said after the stage win.

“It was a pretty clean day for us which was great but we need to focus on tomorrow because we know that anything can happen tomorrow on the second stage.

“We knew that we were in control but you do push yourself a bit so hopefully there is something left in the tank for tomorrow.”

Haw echoed the sentiments around the uncertainty of the second stage.

“We don’t really know what to expect tomorrow because we could get massive water or we could be on a low river so we are going to have to keep an open mind,” Haw said. “There is a big run at the end so it is a bit unknown but that is quite exciting.”

For Peek and Mackenzie very little else could have gone wrong for them but they live to fight another day and are up for the challenge that Friday’s Queen Stage will bring.

“You can prepare as much as you want but the Dusi is always going to throw curve balls at you,” Peek said.

“Today we some issues along the way but it’s how it goes and we have two more days to overcome this and catch up so hopefully the next two days are smooth.”

Mackenzie was happy with the fighting spirit that they showed in the face of the issues that they encountered.

“We worked hard and it was good to see us making up positions and we were running and paddling well but trying to catch up between the swims blew us a little bit.

“I felt like after Devil’s Cauldron we started to get our rhythm back and hopefully we can keep that rhythm going into the next two days,” a positive Mackenzie commented.

In the age group racing it was Sandile Mtolo and Mvelo Ngidi who are leading the Under 23 men’s race overnight ahead of Ross Leslie and Hamish Mackenzie in second and Khwandokuhle Mzolo and Sandile Mbanjwa in third.

Leading the Under 23 women’s race after the opening stage is Cara Waud and Tracey Oellermann who are sixth overall while the first Under 18 women are just behind them in the form of Jessica Behn and Jenna Goddard.

It’s another Under 18 crew who third Under 23 with Sarah Jones and Rachel van Deventer also second Under 18.

In the Under 18 men’s race Jack Shooter and Joshua Simpkins hold the advantage over Benjamin Maehler and Matthew Coetzer in second with James Goble and Ross Palframan in third.

The second, Queen Stage of the MyLife Dusi Canoe Marathon takes paddlers 44km from Dusi Bridge to the Msinsi Resort at Inanda Dam.