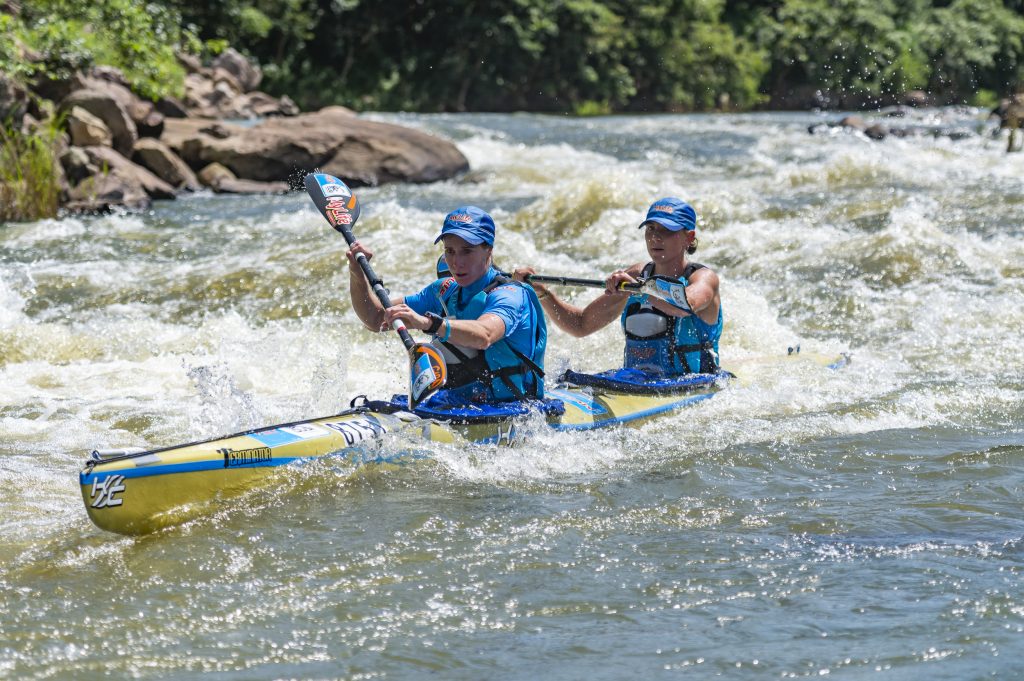 With varying degrees of advantage going into Saturday’s final stage, it was overnight leaders Andy Birkett and Dave Evans and Abby Solms and Bianca Haw that glided into Blue Lagoon as your 2022 MyLife Dusi Canoe Marathon men’s and women’s champions.

For Euro Steel’s Birkett and Evans a buffer of over three minutes was more than enough as they put in another flawless display of river paddling to finish eight and a half minutes ahead of the Team MyLife pair of Thulani Mbanjwa and Msawenkosi Mtolo in second.

It was a ninth title in a row, a twelfth overall for Birkett and first for Evans, who chalked the last three days down to one of the biggest learning curves of his young paddling career.

“It has been an incredible build-up to the race and an incredible last three days of racing,” Stellenbosch University student Evans said.

“Andy was just really positive the whole way and really kept me motivated even when the chips were down and it was just an awesome three days of racing.

“We didn’t do an awful lot together in the lead into the race because we live in different cities but we clicked really well together.”

Birkett has now won the Dusi title with six different K2 partners and for the laid-back star from East London it’s all about building a relationship.

“I have been really lucky over the years and a lot of things have to line up to do well at the Dusi,” Birkett said.

“I really felt that Dave and I clicked and combined well together this year.”

Adding another podium finish to his list of Dusi achievements was the ever-green Team MyLife star Thulani Mbanjwa. He and partner Msawenkosi Mtolo came home in second after leading after the first stage.

It was a tough three days of racing and that elusive win evaded Mbanjwa again, however to finish on the podium was an achievement he is proud of.

“I am definitely happy with another podium with a good friend Msawe,” Mbanjwa said.

“We trained really well through the pre-Dusi build-up and we appreciate the help that we got from MyLife; they let us concentrate on training and racing which is a huge help.

“We knew we had done the work and we wanted to win the race but we didn’t get enough of a gap on the guys on day one.

“Day two was tough and we tried today but it was really hard.”

For another young paddler paddling with one of the race’s legends Mtolo understood that it isn;t an experience that comes around often and he took full advantage of it.

“I have learnt so much from Thulani and the experience that I have got with him I am going to apply to next year’s race,” Mtolo said.

“I am hoping to do well next year but I am very happy that we managed to finish on the podium after three hard days of racing.”

It was the Euro Steel pair of Nqobile Makhanya and Sbonelo Khwela who finished third in the men’s race as they managed to hold off the charge from Hank McGregor and Matthew Millward.

The result for Khwela continued a run of eleven podium finishes in the last fourteen editions of the MyLife Dusi.

The women’s race had the potential to also turn into a tight contest; however Team MyLife’s Abby Solms and Bianca Haw didn’t put a foot wrong on the third and final stage to paddle home to ten minute victory on Saturday.

With a six minute buffer going into the final stage, the pair was concerned that they could lose that advantage to the chasing Jordan Peek and Christie Mackenzie and made sure that they didn’t give the chasing pair a chance over the 36 kilometres into Blue Lagoon.

“I couldn’t keep my breakfast down which is unlike me, I love a good breakfast!” Haw said with a laugh after their win.

“They (Peek and Mackenzie) were so strong yesterday coming from behind and everyone was saying the pressure was on.

“Day three is so unpredictable with water and the rapids so it was just about keeping a clear head and once we got into the river we just enjoyed the whole process.”

Making sure that they kept up the intensity and speed through Saturday’s final stage was the plan for Solms.

“Yesterday (Friday) there wasn’t too much of a rush but today there was a big sense of urgency,” Solms said. “We tried to put in an interval after each rapid and make our put in’s and take out’s clean and I think we did exactly that.

“Day one we had such a superb day and that’s where we gained time and then having a steady day yesterday did leave us something left in the tank for today,” Solms added.

After a day one to forget Euro Steel’s Peek and Mackenzie made up for that on stages two and three and were all smiles when they came across the line in second place.

“I cannot complain with our paddle,” Peek said. “We were obviously disappointed with our day one but we had two clean other days which made it worthwhile.

“Today went well; smooth lines, no admin, no swims so we are happy all around.”

The friends have been smiling throughout the race and despite the disappointment of the first stage they have been positive throughout.

“I don’t think I was smiling so much on day one,” Mackenzie said with a laugh. “The build-up was great and our last two days were incredible and it’s so cool to do a tough race like this with a friend.

“It’s awesome to share this experience with Jords and hopefully we can come back in two years’ time and try again!”

It was the Team MyLife pair of Bridgitte Hartley and Pippa McGregor who put in another solid performance on the third stage to take home third and the final spot on the podium.

In the age group contests it was Ross Leslie and Hamish Mackenzie who won the men’s Under 23 category while Cara Waud and Tracey Oellermann were the fastest Under 23 women’s crew.

Jack Shooter and Josh Simpkins won the Junior men’s race while Jessica Behn and Jenna Goddard were the quickest Junior women’s crew and finished as the second fastest Under 23 crew in the women’s division.

In one of the results of the race the K3 crew of Alex Roberts, Michael-John Robb and Ryan Rodda obliterated the current K3 record to finish in nine hours and 45 minutes. They beat the previous record, set in 2013, by over 30 minutes.