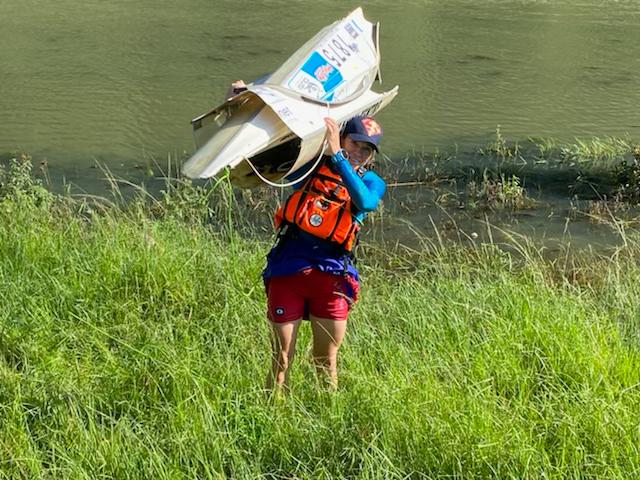 While the champions may have basked in the MyLife Dusi limelight at Blue Lagoon on Saturday afternoon, the race’s real heroes continue to garner praise for helping struggling crews to get to the finish line.

Frenchman Benoit Roger and his local partner Bed Bradford had the crowd cheering them across the line as they dragged their shattered K2 through the water to the finish arch, while gutsy Ingrid Avidon, who was doing her debut Dusi as part of the tough 12×12 Challenge, and her partner Themba Ngcobo, had to run most of the final day with their K2 smashed and cut into small pieces.

For seasoned Durban paddler Debbie Lewis, her 20th Dusi turned into a nightmare at Confluence Rapids early on in the second stage when she and partner Gina Chiesman watched their double canoe wrap around a rock in the fast flowing uMngeni River, and felt their chances of finishing had gone. But it took the intervention of several people that Lewis has dubbed her “Dusi Angels” to get them to the finish.

“I was beyond grateful to look across the river and see our boat being happily and bravely retrieved off the rock by a group of six local young guys who immediately jumped into the river to rescue our boat off the rock,” recalls Lewis.

“They had to pull really hard to get the boat off the rock in a solid flow of water. They never gave up. Then two of them so kindly swam our boat back across the river to us.

With a shattered canoe they had no choice but to swim down the river with their damaged boat until they could get to a path that took them to Gauging Weir, five kilometres downstream.

“That’s where we found our second angel, Umvoti Canoe Club founder Peter Goble. He was there seconding his son and when he saw our plight he without hesitating started fixing the damaged K2, even though he added that he thought it was a “hopeless case”.

With makeshift repairs done Lewis and Chiesman had no choice but to run alongside the river, over Nqumeni Hill portage and then on the ten kilometre long Pipeline Road high on the hillside above the uMngeni.

“Our seconds were amazing! Gina’s husband Deon was driving the vehicle with sounds of Juluka belting from the van while two CitiBank Change a life runners – Ayanda Mtshibosi and Bongani Hlongwana – walked and ran with us every step of the way.

Mtshibosi was moved by the gutsy determination of the two women. “These two women were so brave,” he said “There is a saying “Indlela ibuzwa kwabaphambili” which means never quit, no matter how hard it is.”

Lewis and Chiesman got back to the river at Mfula Store and were able to paddle their still weakened repaired boat to Inanda dam and to the overnight stop at Msinsi Resort.

“I had two stops to have a cry and question if we were being stupid and doing the right thing,” said Lewis.

“We passed a few struggling boats who were also soldiering on to get to the finish. We chatted to everyone during our horrendously long day, asking if they were thinking of withdrawing from the race or carrying on.

“Every answer was the same. There is no option. We will get to the finish. That’s what Dusi is all about. Not giving up.”

The pair made it to the finish in fading light of the late afternoon, after which they left with their support crew to start to process of repairing their K2 properly, a task that took well past midnight to complete.

“We had a golden day three with no admin,” said am emotional Lewis “I am so blessed to have made it to the finish with the assistance of all our Dusi Angels – the real heroes.”